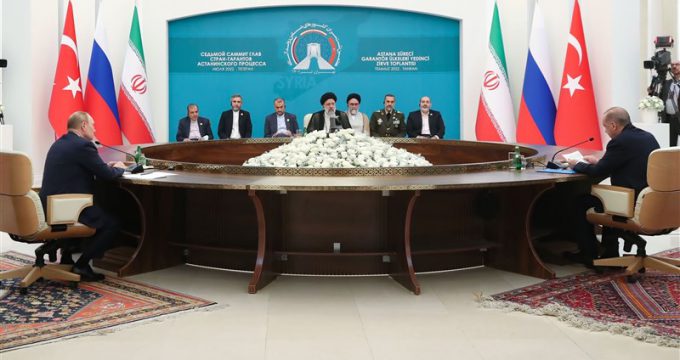 Iran, Russia, and Turkey have held a trilateral summit on the Syria peace process, condemning foreign meddling and emphasizing Syrians’ right to determine their country’s fate.

The seventh summit of the Astana process was held on Tuesday in Tehran and attended by Iranian President Ebrahim Raisi, Russian President Vladimir Putin and Turkish President Recep Tayyip Erdogan.

Addressing the event, Raisi said Syria’s fate had to be decided by its own people and that military intervention will only aggravate the situation there.

“Nearly 11 years have passed since the onset of the Syrian crisis, the Islamic Republic of Iran still believes that the only solution to the Syrian crisis is political, and military action is not only ineffective, but will worsen the situation,” he said.

“As Guarantor States of the Astana Process, we have always supported the political solution within the framework of the agreements reached, including holding the Syrian constitutional negotiations,” he stated.

Raisi also denounced the US’ unilateral sanctions that “have put additional pressure on the Syrian people and deprived them of the possibility of a normal life.”

The Islamic Republic condemns all sanctions targeting the world’s nations, “especially the Syrian nation, declares that it will continue to support the people and government of Syria with greater strength,” he stated.

He went on to say that the illegal presence of the US forces “has destabilized Syria and the region,” adding, “The US, while increasing its illegal military bases, is looting natural resources of Syria, especially its oil.”

He called on the United States to withdraw its forces “from the entire region, including from Syria, as soon as possible”.

The US and its allies invaded Syria in 2014 under the pretext of fighting off the Daesh Takfiri terrorist group. Washington began stealing and smuggling the Syrian crude from the oil-rich eastern Syrian province of Dayr al-Zawr and elsewhere under former American President Donald Trump.

Raisi also said, “We also strongly condemn the increase in the scope of the Zionist regime’s encroachments on Syrian territory and the targeting of the country’s basic infrastructure, including airports and ports.”

Such actions violate the sovereignty of Syria, increase instability and threaten regional and international peace and security, he said, adding the occupying regime itself will suffer the consequences.

He called on the UN Security Council to fulfill its duties “in this regard before the aggression of the Zionist regime becomes a major security problem.”

The Astana process was launched in 2017 at the initiative of Iran, Russia and Turkey on how to reduce tensions in Syria.

Raisi said the process has obtained some “good achievements” so far, adding, “The responsibility for its preservation and development rests primarily on us, friendly countries, as its guarantors”.

Elsewhere in his remarks, the Iranian president said, “We emphasized our determination to fight terrorism in its various forms in the entire region, including Syria.”

He highlighted the sacrifices made in the fight against terrorism, commemorating the memory of those who had lost their lives down this path, most notably Iran’s senior anti-terror commander, Lieutenant General Qassem Soleimani.

General Soleimani, who used to lead the Islamic Republic’s military advisory support for Syria’s counter-terrorism efforts, was assassinated in a United States’ drone strike against Baghdad in early 2020.

The Russian president also addressed the event, condemning the West for plundering Syria’s natural wealth with the intention of disintegrating the country.

Putin also called on the UN to provide humanitarian aid to Damascus without any preconditions.

Concerning advancement of a political solution to Syria’s crisis, he said, “Good steps must be taken in order to help inclusive dialog so that the Syrians would be able to determine their fate without external interference.”

Concluding his remarks, the Russian head of state considered the seventh summit to have been fruitful.

Meanwhile, Turkey’s president also called the Astana process the only platform that had taken necessary measures for peace in Syria.

“We are all like-minded concerning [the fact] that the Syrian crisis can only be resolved through political solutions,” Erdogan added.

The summit ended by issuance of a final statement, through which, the Astana process’s guarantor states likewise insisted that there were no military solutions to the Syrian conflict, and underlined their resolve to continue their cooperation in the fight against terrorism in all its forms and manifestations.