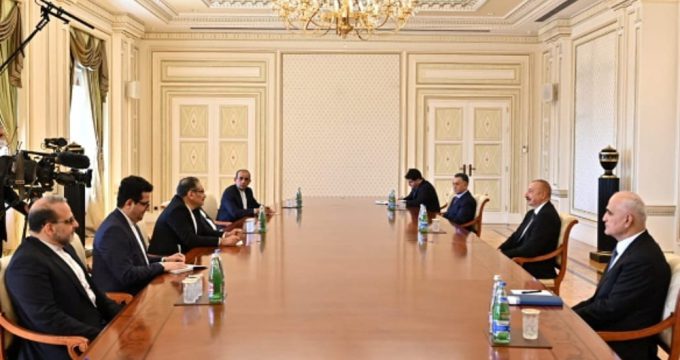 Secretary of Iran’s Supreme National Security Council (SNSC) Ali Shamkhani says no limits can hinder the expansion of relations with Azerbaijan in all fields.

In a meeting with Azerbaijan’s President Ilham Aliyev in Baku on Friday, Shamkhani said the promotion of ties with the neighboring countries is among the main priorities of the Iranian government. Iran is resolute on enhanced cordial relations with Azerbaijan, as a Muslim neighboring state, in all areas, he said.

Pointing to “very good” ties between the two countries over the past 30 years, the top Iranian security official said Tehran and Baku currently enjoy an appropriate level of relations, which would be further improved given firm determination from both sides.

Shamkhani reiterated Iran’s resolve to counter those who seek to undermine Tehran-Baku ties.

The Azeri president, for his part, said senior officials from both sides are determined to improve relations and are making serious efforts in this regard. They would not be affected by pressure from those countries that are not interested in friendly ties between the two neighboring states, he said.

Aliyev said civilizational, cultural, and religious bonds between the Iranian and Azeri nations contribute to overcoming obstacles in the way of expansion of relations. He said that after the second Nagorno-Karabakh war and the return of the occupied territories of Azerbaijan, very appropriate conditions have been made for making use of common capacities in the fields of transit, oil, trade, and energy.

The Azerbaijani president invited his Iranian counterpart to visit Baku, saying he would also travel to Tehran to pursue and accelerate the implementation of agreements signed between the two countries.

In a meeting with Secretary of the Security Council of Azerbaijan Ramil Usubov, Iran’s top security official said constant support for peace and stability in the region is among the main strategies of the Islamic Republic.

“Today, all regional countries believe that imported security cannot serve their long-term interests and that the only way to achieve sustainable peace and stability is responsible cooperation among regional countries,” Shamkhani said. He emphasized that the arrogant system and ill-wishers should not be allowed to disturb friendly relations between the two countries.

Shamkhani pointed to Israeli plots to infiltrate the region’s security mechanisms, saying, “The Zionist regime, as the main source of malice and insecurity in the region, is now facing political crises and internal economic and social challenges and is trying to reduce internal pressure by transferring internal crises to the region.”

He underscored the importance of respecting the territorial integrity and national sovereignty of regional countries. “We oppose and will counter any move that will create insecurity and alter the region’s geopolitics.”

The Azerbaijani official, Usubov, reiterated his country’s firm determination to cooperate with regional countries in an effort to protect regional peace. He called for strengthening cooperation with Iran in the fight against terrorism, organized crimes, and smuggling of illicit drugs, emphasizing that common border areas must be safe and turn into the symbol of friendship between the two countries.