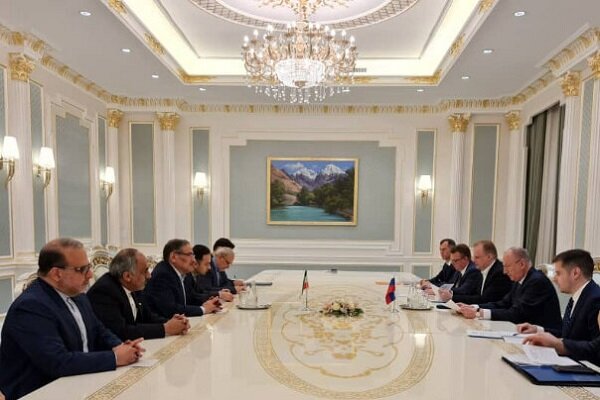 Secretary of Iran’s Supreme National Security Council (SNSC) said that the world must unite with one another to counter US unilateralism.

Rear Admiral Ali Shamkhani, who is in Tajikistan to take part in 4th round of Regional Security Dialogue, met and held talks with his Russian counterpart Nikolai Patrushev on Friday to discuss bilateral, regional and international ties and also issues of mutual interests.

During the meeting, Iran’s top security official expressed his satisfaction with the excellent level of consultations between the two countries and stressed the need to further enhancement of cooperation between Iran and Russia due to the new developments happening in the international arena.

He then pointed to the extensive sanctions imposed by the West against Russia and stated that Islamic Republic of Iran has been subject to sanctions for 43 years.

Shamkhani emphasized the need for strengthening strategic cooperation between Tehran and Moscow to counter US unilateralist policies and added, “It seems that sanctions imposed against Russia will not be lifted with the termination of war and therefore, an integrated plan must be drawn up between sanctioned countries on a strategic and long-term horizon.”

Iran’s top security official described acceleration of economic interactions and relations between Iran and Russia and stated that the two countries should pave suitable ways for countering sanctions and turning it as an opportunity for strengthening economy between the two countries.

Turing to the Russia’s military operation in Ukraine, he said that the Western countries want to distract concentration of Russia on other areas especially Central Asia, Caucasus and Syria and reiterated that some countries are taking advantage of Ukraine crisis to pursue their expansionist policies in the region.

Elsewhere in his remarks, Shamkhani expressed his major concern over the situation in Afghanistan and continuation of insecure presence of various terrorist groups in the country and added that lack of an inclusive government in Afghanistan is one of the main reasons for spread of instability and insecurity in the country.