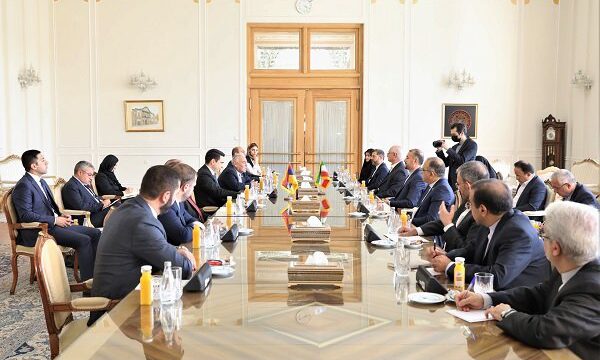 Armenia asks Iran to assist in peace treaty with Azerbaijan

President of the National Assembly of Armenia, Alen Roberti Simonyan has called on Tehran to assist in concluding a peace treaty with the Azerbaijan Republic.

In the meeting, Amir Abdollahian described Armenia as an important friend and neighbor to the Islamic Republic of Iran.

The foreign minister also pointed to the high-level political relations between the two countries and stressed the need to enhance bilateral economic cooperation by taking advantage of the two countries’ diverse capacities and capabilities to $1 billion level.

He further described Armenia is an important part of the international Persian Gulf-Black Sea corridor and declared the readiness of Iranian companies to conduct and complete infrastructure projects in Armenia, especially in the field of transportation.

According to Amir Abdollahian, Iran is ready to use all its capacities and capabilities to resolve the disputes between Armenia and the Azerbaijan Republic.

He referred to the Islamic Republic of Iran’s principled stance in supporting the territorial integrity of the countries in the region, preserving international borders and the need to respect the sovereignty of the regional countries and said that, “Peace and stability in the Caucasus has always been and still is one of the Islamic Republic’s priorities and in this regard, Iran will not hesitate to provide any assistance as in the past to resolve the disputes between Armenia and Azerbaijan.

The minister also expressed hope that the second round of talks among the 3 + 3 Format( three countries of the South Caucasus — Georgia, Armenia, and Azerbaijan ) will be held in the Islamic Republic of Iran in the near future.

Alen Roberti Simonyan, for his part, expressed his happiness with the process of expanding relations between the two countries at the bilateral level and in international level as well, and said that, “The Republic of Armenia attaches special importance to the position of the Islamic Republic of Iran as an effective and influential country in the region and pays special attention to the development of relations with Tehran.”

President of the National Assembly of Armenia also emphasized that his country is moving on a peaceful path in the region and called for Islamic Republic of Iran’s assistance to conclude a bilateral peace treaty with the Republic of Azerbaijan.

He also stressed that Yerevan sees no ceiling for expanding cooperation with Iran.

He also called the establishment of the Consulate General of the Islamic Republic of Iran in the Armenian Syunik Province as a turning point in the relations between the two countries, and announced the readiness of Armenia to establish a Consulate General in Iran’s Tabriz.