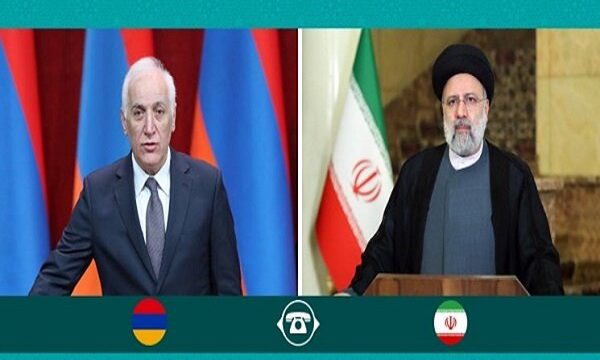 Iranian President Ebrahim Raisi told his Armenian counterpart that Iran considers Armenia a friendly and close country and attaches importance to its neighborliness with Armenia.

Speaking in a phone call with the President of Armenia Vahagn Khachaturyan on Thursday, Raisi described Iran-Armenia’s continuous consultations as a sign of the importance and depth of friendly relations between the two countries.

“Protecting the geopolitics of the region, including international borders, respecting the national sovereignty of countries, and strengthening communication infrastructure between the regions is the principle of the Islamic Republic of Iran,” the Iranian president added.

He also called for expanding Iran-Armenia’s bilateral and multilateral cooperation in the fields of energy and transportation, saying that these ties will strengthen peace, stability and economic and trade prosperity in the region.

“Iran supports the progress in the peace talks between Armenia and the Republic of Azerbaijan,” he also pointed out, expressing hope that that the remaining issues in this regard will be resolved peacefully and in accordance with the principles of international law and respecting the sovereignty and territorial integrity of the two countries.

President of Armenia, for his part, presented a report on the implemented agreements and appreciated the principled positions of the Islamic Republic of Iran in the developments in the region, describing Iran’s role in the region as important and effective.

Expressing his country’s interest in expanding economic, trade, political, and cultural cooperation with Iran, Khachaturyan said that the continuous holding of a joint commission on economic cooperation between the two countries will definitely facilitate and accelerate the expanding process of relations between Iran and Armenia.

He also welcomed the holding of the 3+3 summit in Tehran as soon as possible.