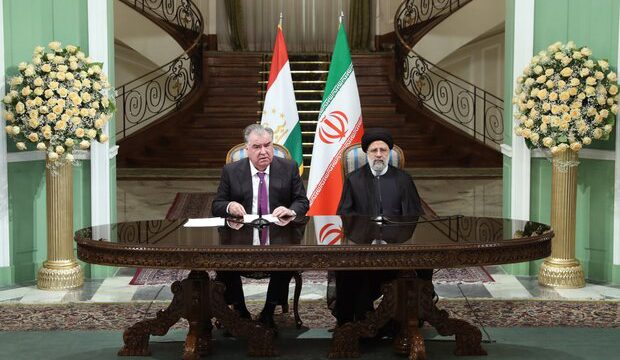 These documents were signed by the Ministers of Foreign Affairs, Industry, Mines and Trade, Petroleum, Roads and Urban Development, Energy, Economic Affairs and Finance, Cultural Heritage and Tourism, Justice, Sports and Youth Affairs, and Cooperation, Labour and Social Welfare, and Heads of the Exchange and Securities Organisation and the Chamber of Commerce, Industries, Mines and Agriculture of Iran and their Tajik counterparts.

Tajik President Emomali Rahmon who arrived in the Iranian capital of Tehran on Sunday afternoon, was officially welcomed by the Iranian President on Monday morning in the Saadabad Complex.

The two presidents of Iran and Tajikistan held a meeting after the official welcoming ceremony.

“Good steps were taken to improve relations between Tehran and Dushanbe after Iran attended the Shanghai Summit,” said the Iranian President.

Emomali Rahmon, for his part, said that strengthening cooperation between Iran and Tajikistan is one of Tajikistan’s foreign policies.