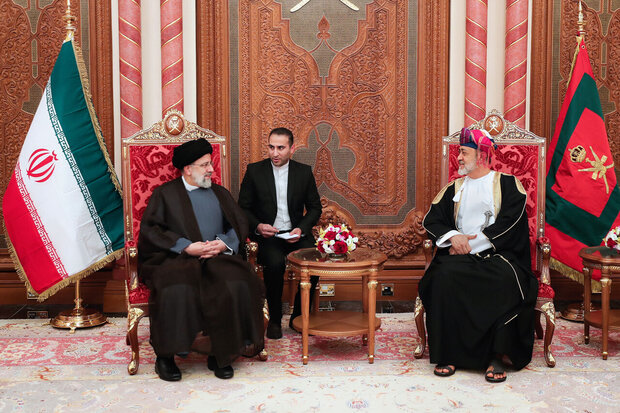 Iran and Oman have signed 12 cooperation documents and memorandums of understanding for the expansion of bilateral cooperation in various fields, as Iranian President Ebrahim Raisi visits the Persian Gulf sultanate.

The documents were signed in Muscat on Monday by the two countries’ ministers and high-ranking officials in such fields as energy, politics, transportation, diplomacy, economy, tourism, sports and the environment.

The Iranian president, who arrived in Muscat on a key visit earlier in the day, was officially welcomed by Oman’s Sultan at the Al Alam Palace.

During the official welcoming ceremony, national anthems of the two countries were played and President Raisi and Sultan Al Said reviewed the guard of honor.

A 21-gun salvo was performed in the honor of the Iranian president and the high-ranking delegation accompanying him.

Speaking to reporters before his departure for Muscat, the Iranian president said, “The remarkable key point in the region is that dialog and cooperation among the regional countries would create security. The presence of foreign forces in the region does not create security by any means and could even threaten regional security.”

Since taking office in August, Ebrahim Raisi has emphasized the need for more trade and economic cooperation with Arab countries in the Persian Gulf.