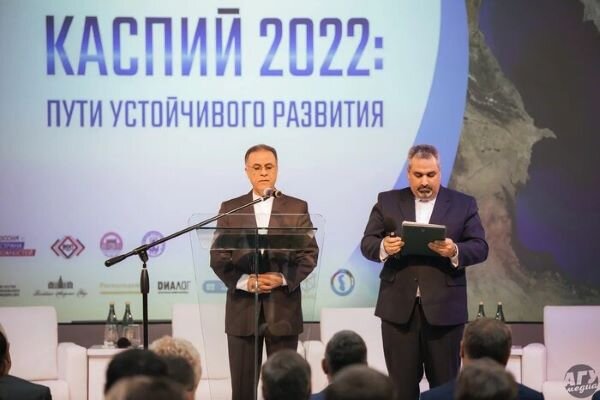 Expressing Iran’s readiness to boost scientific cooperation with the Caspian Sea region, the Iranian Consul-General said that the youth of Caspian Sea states can play an important role in regional peace and development.

The international scientific forum “Caspian-2022: ways of sustainable development” at Astrakhan State University was held in the presence of Russian provincial and national figures, university professors, as well as the Consul-General of the Islamic Republic of Iran in Astrakhan Mehdi Akuchekian.

The forum is aimed at discussing youth policy, as well as the development of key import substitution projects in shipbuilding, IT technologies, and transport infrastructure.

Referring to the young populations of Caspian Sea states which include Kazakhstan, Turkmenistan, Iran, Azerbaijan, and Russia, the Iranian Consul-General in Astrakhan said in this forum that the youth of these countries can pave the way for achieving development and progress in all scientific, economic, political, and cultural fields.

Relying on their knowledge and potential, the young population of the Caspian sea region can play an important and irreplaceable role in developing infrastructure and promoting national and regional interests in order to achieve a safe, peaceful, and developed region, Akuchekian further noted.

ُStating that the northern provinces of Iran, including Gilan, Mazandaran, and Golestan, with a population of about 7 million, are located on the coastline of the Caspian Sea, he added that Iran attaches great importance to environmental issues related to the Caspian Sea.

Elsewhere in his remarks, he expressed the determination of Iran to strengthen scientific and academic relations between the countries of the Caspian Sea region.