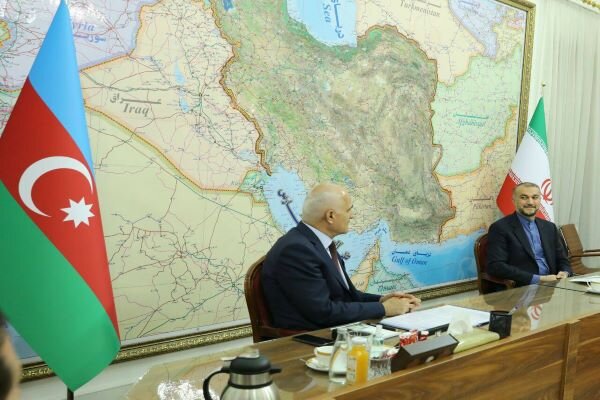 Mustafayev’s visit to Tehran, who also heads the Azerbaijani side of the Joint Economic Cooperation Committee with Iran,  was aimed to follow up on agreements previously reached by the two sides and discuss further cooperation.

Referring to the current trip of Iran’s First Deputy Parliament Speaker Ali Nikzad to Azerbaijan, which is taking place simultaneously with Shahin Mustafayev’s visit to Tehran, Amir-Abdollahian said that these visits indicate that the two countries are determined to expand their cooperation in all areas.

Saying the desire of the presidents of the two countries is to deepen bilateral cooperation, the Iranian top diplomat expressed satisfaction over the growth of trade exchanges between the two sides in the past eight months as well as the implementation of a project to swap Turkmenistan’s gas to Azerbaijan via Iran.

The need to facilitate the transportation of citizens of the two countries, financial exchanges, and cooperation of border provinces were other issues raised by the Iranian Foreign minister.

The Azeri official, on his part, said that top officials of the two countries have the political will to boost mutual cooperation and stressed their role in achieving that goal.

The meeting between the presidents of the Islamic Republic of Iran and the Republic of Azerbaijan on the sidelines of the ECO summit in Ashgabat was a turning point in starting a new phase in relations between the two countries, he stressed.