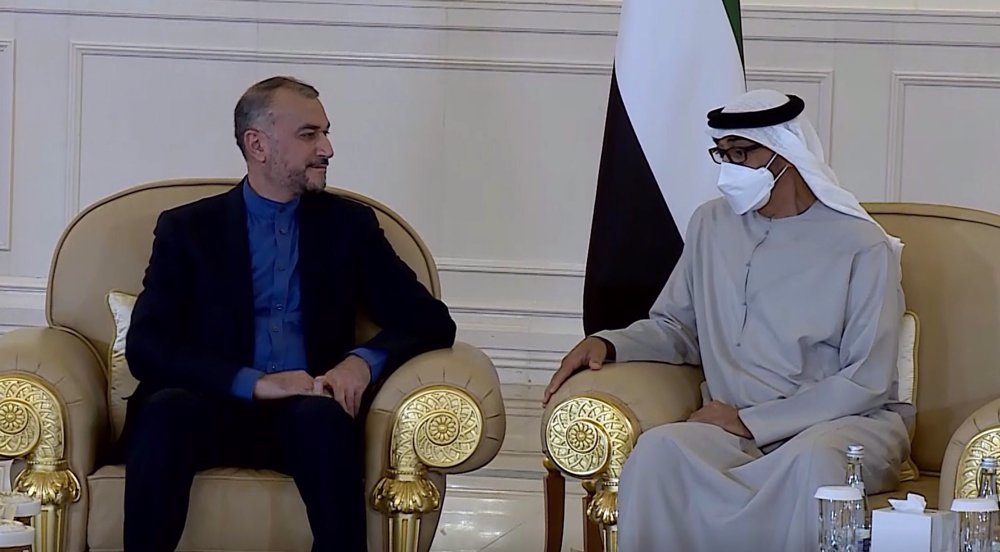 Iranian Foreign Minister Hossein Amir-Abdollahian says warm relations among neighbors disappoint the enemies, as he meets with the newly-appointed president of the United Arab Emirates.

“A new page was opened in the relations between the Islamic Republic of Iran and the UAE,” the top Iranian diplomat tweeted after meeting Mohammed bin Zayed Al Nahyan in Abu Dhabi on Monday.

“We warmly shake hands with our neighbors. The warmth of the neighbors’ relations disappoints the enemies of the region.”

Iran’s top diplomat traveled to the United Arab Emirates (UAE) on Monday to pay his respects after the death of President Khalifa bin Zayed, while Tehran welcomed the appointment of the Persian Gulf state’s new ruler.

The trip by Hussein Amir-Abdollahian was the highest level visit by an Iranian official to the Persian Gulf country in recent months.

In 2019, the UAE started engaging with Iran following mysterious attacks on tankers off Persian Gulf waters.

Iran’s deputy Foreign Minister Ali Bagheri Kani visited the UAE in November, when he said the two countries had agreed to open a new chapter in bilateral relations.

UAE strongman Sheikh Mohammed, who was formally elected president by the country’s federal supreme council on Saturday, led a realignment of the Middle East that created a new anti-Iran axis with Israel.

Last August, President Ebrahim Raisi said Iran is determined and open to expansion of relations with the UAE.

On Monday, President Raisi extended his congratulations to Sheikh Mohammed on his appointment as president of the United Arab Emirates, expressing hope that the two countries would further improve relations to serve common interests.

Raisi hoped that mutual relations would be expanded with wisdom and in line with the interests of the two countries.

Sheikh Khalifah, who was also the ruler of Abu Dhabi emirate, passed away on Friday at the age of 73.

He was battling illness for several years and had long ceased having involvement in day-to-day affairs. According to the UAE constitution, Vice President and Prime Minister Sheikh Mohammed bin Rashid Al Maktoum, the ruler of Dubai, will act as president until the federal council, consisting of the rulers of the seven emirates, meets within 30 days to elect a new president.

A huge re-exporting hub in the Persian Gulf, the UAE has been a major supplier of goods and machinery to Iran since 2018 when Tehran came under a series of unilateral economic sanctions by the United States.