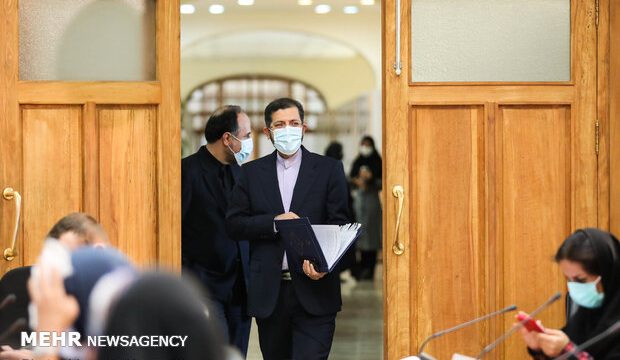 Tehran says the prolonged talks in Vienna on reviving the 2015 Iran deal can be concluded successfully if the US honors “the Iranian nation’s rights”.

Speaking at a weekly presser in Tehran on Monday, Iranian Foreign Ministry spokesman Saeed Khatibzadeh said the Iranian delegation would return to the Austrian capital as soon as the US makes a political decision on whether it is willing to honor the agreement.

He was making a reference to an upcoming trip to Tehran by the European Union’s deputy foreign policy chief for further consultations with top Iranian officials over the fate of the deal.

Several rounds of negotiations have been held in the Austrian capital since April 2021 to bring the US back into the Iran deal, with the EU leading the talks as the coordinator.

The US left the accord, officially called the Joint Comprehensive Plan of Action (JCPOA), in 2018 and launched a maximum pressure campaign against the Islamic Republic, despite the latter’s full adherence to its commitments under the deal.

Asked whether European Union foreign policy chief Josep Borrell was correct to use the word “impasse” to describe the state of the talks, Khatibzadeh refused to use the same word and reiterated that an agreement can be “easily” reached once the US makes a decision.

The US, he went on, is not expected to present a gift to Iran or do anything beyond its commitments, but it must restore the rights of the Iranian people.

Elsewhere during his press conference, Khatibzadeh was asked to comment on the case of Hamid Nouri, an Iranian citizen who has been incarcerated in Sweden since 2019 over alleged rights abuses back in the 1980s.

He slammed Nouri’s trial as illegal. “The court of Hamid Nouri has no jurisdiction, and unfortunately, Nouri’s basic rights have not been respected.”

Nouri was arrested upon arrival in Sweden at Stockholm Airport in November 2019 and was immediately imprisoned. He has been held in solitary confinement for over two years.

Swedish prosecutors have requested the maximum penalty of life imprisonment for Nouri, accusing the former Iranian judiciary official of prisoner abuse in 1988.

The charges against Nouri stem from accusations leveled against him by members of the anti-Iran terrorist Mujahedin-e-Khalq Organization (MKO), which has conducted numerous assassinations and bombings against Iranian statesmen and civilians since the 1979 victory of Iran’s Islamic Revolution.

“My husband traveled to Sweden with an invitation and as he was disembarking from the plane he was brutally detained and insulted by several police officers in front of a crowd of Iranians and others and taken into custody,” Nouri’s wife told Press TV last week.