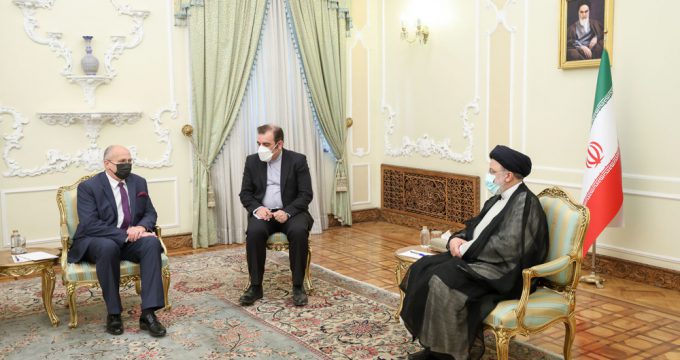 Raisi made the remarks in a Sunday meeting with the visiting Polish Foreign Minister Zbigniew Rau, during which the two sides explores ways of further expansion of bilateral relations.

Touching on the current conflict between Ukraine and Russia, Raisi said, “Just in the same way that the Islamic Republic of Iran is opposed to conflict and war, it is also firmly opposed to NATO’s expansionist policies.”

Russian President Vladimir Putin announced the launch of the “special military operation” in Ukraine on February 24. The conflict has provoked a unanimous response from Western countries, which have imposed a long list of sanctions on Moscow.

Russia says it will halt the operation instantly if Kiev meets Moscow’s list of demands, including never applying to join NATO.

In a joint press conference with his Polish counterpart earlier in the day, Iran’s Foreign Minister Hossein Amir-Abdollahian said the Islamic Republic is against war anywhere in the world, underscoring diplomacy as the sole way out of the crisis in Ukraine.

“We oppose war in Ukraine as we do in Yemen, Afghanistan, Syria, Iraq or any other place in the world,” the top Iranian diplomat said.

Elsewhere in his remarks, Raisi criticized the low level of trade and economic cooperation between Iran and Poland, saying that the two countries have various potentialities, including in the industrial and economic fields, which must be utilized through joint efforts with the purpose of improving bilateral interactions.

The Polish foreign minister, for his part, said the history of mutual relations between Tehran and Warsaw dates back to the 16th century and noted that Tehran and Warsaw have had friendly relations for almost five centuries. He appreciated Iran’s hospitality when receiving the Polish refugees during World War 2.

Rau said his country seeks further promotion of cooperation with Iran in such areas as trade, economy, culture and science.