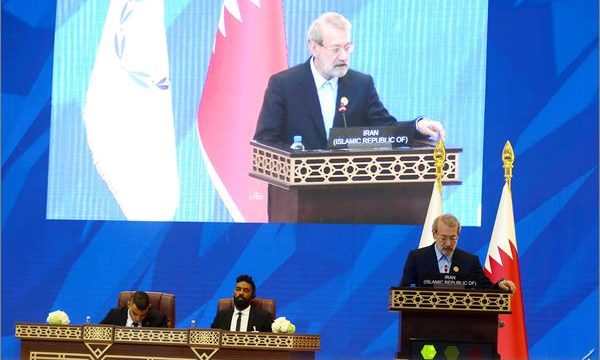 Iranian Parliament Speaker Ali Larijani says the “ruthless” policies adopted by US President Donald Trump during his term in office have created a tense situation in the world, undermining the global order and international peace.

Rouhani asks Leader for withdrawal of €2b from NDFI: MP

In a letter to the Leader of the Islamic Revolution Ayatollah Khamenei, Iranian President Hassan Rouhani applied for permission to grant some €2 billion from the National Development Fund of Iran (NDFI) to renovation of flood-stricken areas, a Parliament Member told reporters on Monday.

Mahan Air, a private Iranian airline accused by the West of transporting military equipment to Middle East war zones, on Monday launched a direct flight to Venezuela, as Tehran voices support for Caracas against a U.S. backed opposition.

Iranian Parliament Speaker Ali Larijani said that designating the Islamic Revolution Guards Corps (IRGC) as a terrorist entity will have dire consequences for Washington, adding that he thinks that the White House is not that much senseless to risk the move.

Prime Minister of Pakistan Imran Khan offered humanitarian assistance to Iran to help the victims of devastating floods in the Islamic Republic.

Iran’s Foreign Ministry strongly condemned an aerial attack by the Saudi-led military coalition on a residential area in Yemen’s capital Sana’a that killed at least 11 civilians, including schoolchildren.

The United Nations (UN) has created a specific banking payment channel for Iran to receive cash aids for its flood-stricken areas, the UN Resident Coordinator and UNDP Resident Representative in Iran Ugochi Daniels announced in a news conference on Monday.

Speaker calls on Islamic countries to act responsibly about Palestine

Iranian Parliament Speaker Ali Larijani condemned negligence of some Islamic countries in caring about the issue of Palestine, and urged them to pay heed to the problems of the Palestinians.