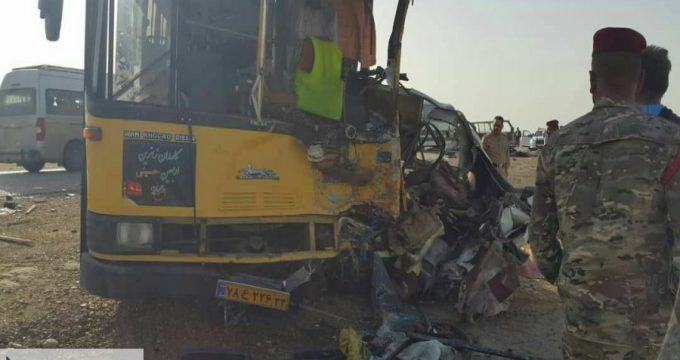 IRNA – The collision of a bus and a van in Kut, eastern Iraq on Monday claimed the lives of 11 Iranian pilgrims and injured 19 more.

Speaking to the Islamic Republic News Agency (IRNA), an informed source said that the accident happened in the morning when a van which was on its way from Mehran to Kut hit an Iranian bus moving toward Jassan.

Based on the preliminary reports, the accident was caused by the van driver’s drowsiness and all passengers of the van were killed, the informed source said.

Some passengers on the bus were injured, he said, adding that the bus driver is in serious condition.

Over 24 Iranian pilgrims have so far been killed in car accidents during Arbaeen rituals.

Arbaeen mourning ceremony is one of the largest religious gatherings in the world. It marks the 40th day after the martyrdom anniversary of the grandson of Prophet Mohammad (PBUH), Imam Hussein (AS), the third Imam of the Shia Muslims.

Every year millions of Iranian Shia Muslims and Muslims from other countries travel to the holy cities of Iraq to make Arbaeen pilgrimage. This year Arbaeen falls on October 30.