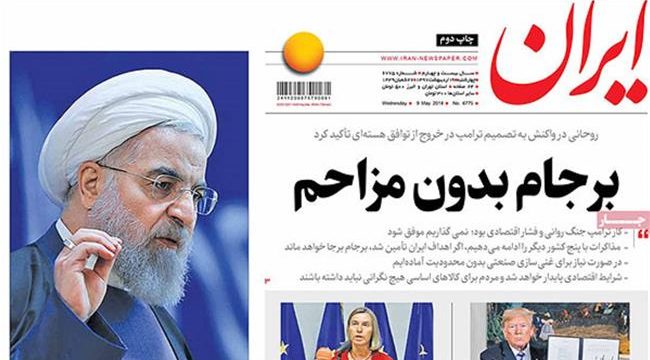 May 11, The Iran Project – On Tuesday (May 8), President Donald Trump announced his decision to withdraw the United States from Iran’s nuclear deal with the world powers and re-impose sanctions against the Islamic Republic. “I am announcing today that the United States will withdraw from the Iran nuclear deal,” Trump said in a televised address from the White House. The move sparked harsh condemnations from top Iranian and foreign officials across the world and ultimately satisfied the Zionist regime of Israel and Saudi Arabia which are dictating their policy to the US.

The announcement came despite massive efforts by the European allies of the US to convince Trump to stay in the 2015 deal, known as the Joint Comprehensive Plan of Action (JCPOA), reached between Iran and the P5+1, five permanent members of the UN Security Council – the US, France, Britain, Russia and China – plus Germany.

Cons of Trump’s move inside Iran

In response to Trump’s announcement, Iranian Leader Ayatollah Khamenei stated that the US problem with Iran was not related to the country’s nuclear program.

“We accepted the JCPOA, but enmities with the Islamic Republic did not end. Now they raise the issue of our presence in the region and the issue of missiles. If we accept them too, they will bring up another issue,” he said.

“The reason for US opposition to the establishment is that the US used to completely dominate [Iran] but the [Islamic] Revolution cut off their hands [from the country],” he added.

Further, the Leader of the Revolution stated: “A few days ago, Trump wrote a letter to the leaders of some Persian Gulf countries, to which we have access. In the letter, he indicated that he spent $7 trillion on these countries, so they must adhere to his orders. Well, Trump, you have spent all this money to dominate Syria and Iraq, but you couldn’t do it; you will go to hell with your failures.”

Iran’s President Hassan Rouhani said shortly after Trump’s announcement that Iran will work with Russia, China and the three European nations to keep the deal in place.

Cons of Trump’s move outside Iran

Shortly after US President’s announcement, the European Union’s diplomatic chief Federica Mogherini said the bloc is “determined to preserve” the Iran nuclear deal.

Moreover, May, Merkel and Macron issued a joint statement and voiced their supports from Iran.

“Together, we emphasize our continuing commitment to the JCPoA. This agreement remains important for our shared security. We recall that the JCPoA was unanimously endorsed by the UN Security Council in resolution 2231. This resolution remains the binding international legal framework for the resolution of the dispute about the Iranian nuclear programme. We urge all sides to remain committed to its full implementation and to act in a spirit of responsibility,” the statement reads.

The European Union’s diplomatic chief Federica Mogherini has said the bloc is “determined to preserve” the Iran nuclear deal.

“France, Germany and the UK regret the US decision to leave the JCPOA. The nuclear non-proliferation regime is at stake,” Macron said on Twitter moments after Trump spoke.

“We will work collectively on a broader framework, covering nuclear activity, the post-2025 period, ballistic activity, and stability in the Middle-East, notably Syria, Yemen, and Iraq,” Macron added.

Also, former US President Obama in a statement criticized Trump’s decision to pull the US out of the Iran nuclear deal.

In a meantime, Hillary Clinton warned that this move dealt a blow to the United States’ safety and credibility.

Pulling out from the Iran nuclear deal was a “big mistake” which is detrimental to the United States’ safety, Clinton wrote on Twitter.

“Pulling out of the Iran nuclear deal is a big mistake. It makes America less safe and less trusted,” Hillary tweeted, adding that “anyone who thinks bombing is the answer is woefully misinformed.”

Meanwhile, EU Commission President Jean-Claude Juncker said Wednesday that in the wake of Trump’s decision to pull out of the Iran nuclear deal, the United States “no longer wants to cooperate with other parts in the world.”

In an address to Belgium’s Flemish regional parliament, Juncker said that it was up to the EU to take on the mantle of the United States.

Juncker says, “At this point, we have to replace the United States, which as an international actor has lost vigor, and because of it, in the long term, influence.”

In a brief statement, the International Atomic Energy Agency’s director-general, Yukiya Amano, said that “as of today, the IAEA can confirm that the nuclear-related commitments are being implemented by Iran.”

Amano said: “Iran is subject to the world’s most robust nuclear verification regime under the (deal), which is a significant verification gain.”

The Iranian press and people from all political leanings have lashed out alike at Trump’s pullout of the Iran nuclear accord. Newspapers associated with either the Reformists or the Principlists, widely seen as the two main political camps in the country, ran headlines condemning the Tuesday decision by US President Donald Trump.

Students from different universities in Tehran were gathering in front of the former US embassy building to protest Washington’s failure to fulfill its commitment under the agreement.

Pros of Trump’s move: Only two

Saudi Arabia said it “supports and welcomes” Trump’s decision to pull out from JCPOA.

“The kingdom supports and welcomes the steps announced by the US president towards withdrawing from the nuclear deal… and reinstating economic sanctions against Iran,” said a statement released by the Saudi Arabian Foreign Ministry.

The statement further claimed Iran was “taking advantage of the revenue generated by the lifting of the sanctions to destabilize the region.”

“For months now, Iran has been transferring lethal weaponry to its forces in Syria, with the purpose of striking at Israel,” Netanyahu said. “We will respond mightily to any attack on our territory,” he further claimed.

For sure, Iran’s nuclear deal was hailed as a historic event when it was signed between Iran and the six global powers in 2015 and was also viewed by many as the most significant foreign policy achievement.

Trump decided to withdraw from the Iran nuclear deal because Israel and Saudis, that are dictating the policy of the United States, were not satisfied with the agreement from the very beginning.