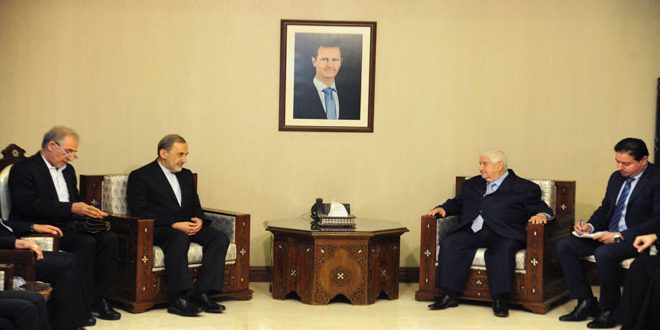 Al-Moallem and Velayati: Increasing coordination between Iran and Syria to face terrorism

Deputy Prime Minister, Foreign and Expatriates Minister Walid al-Moallem on Wednesday discussed with Adviser to the Supreme Leader of Iran for International Affairs Ali Akbar Velayati the strategic relations between Syria and Iran and means to boost them in all fields.

President described the recent currency policy by the government as an important step for decreasing concerns of people, producers and businesspeople and increasing predictability for future planning.

Iranian Minister of Petroleum Bijan Zangeneh said, “Disagreements between Iran and India over Farzad B Development Project have been resolved.”

French president: JCPOA should be preserved

French President Emmanuel Macron on Tuesday reiterated the importance of preserving the 2015 Iran nuclear deal known as the Joint Comprehensive Plan of Action (JCPOA) while at the same time criticizing Tehran’s missile program.

A senior advisor to Iranian foreign minister Hossein Jaberi Ansari on Tuesday dismissed instrumental use of chemical weapons issue as unacceptable, saying that Iran favors a legal approach to deal with the alleged use of such arms.

France’s energy giant Total has carried out tendering for subcontracts and other preparatory work at its South Pars Phase 11 project in Iran, the CEO of Pars Oil and Gas Company (POGC) said.

Iran’s Foreign Ministry spokesman hit back at Saudi Crown Prince Mohammed bin Salman for his anti-Iran remarks in a visit to France, saying Saudi Arabia’s role in fostering extremism and terrorism has become clear to the world.

Iranian Minister of Petroleum Bijan Zangeneh has said $60 a barrel is a good price for both oil producers and consumers and what is important is to avoid volatility in the market.

Attack on T-4 airbase to be responded: Iran official

A top advisor to Iran’s Supreme Leader warned the Zionist regime of Israel against the repercussions of its attack on T-4 airbase in Syria.