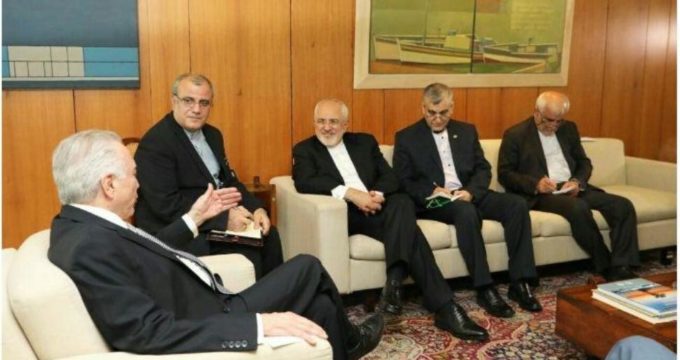 Zarif referred to the cooperation grounds between the two countries in energy, transit, agriculture and advanced technologies.

He also called for removing banking barriers by creating brokerage ties between the two sides.

Using national currencies of both countries, facilitating operational Brazil exclusive credit for Iran, maintaining cooperation in oil and gas, implementing joint projects in new technologies like nano-technology and bio-technology and aerospace were among other topics discussed by both sides.

Both countries need to broaden relations for promoting economic activities, he said.

Iran is ready for Brazil investment in oil and gas fields and also transportation, he added.

He also called for continuation of political talks between the two countries.

Temer, for his part, expressed interest in developing ties with Iran and establishing cooperation in the field of advanced technologies.

He called for exchange of political and economic delegations with Iran, saying it will result in cementing relations, Temer said.

He described cooperation in oil and gas with Iran as practical.