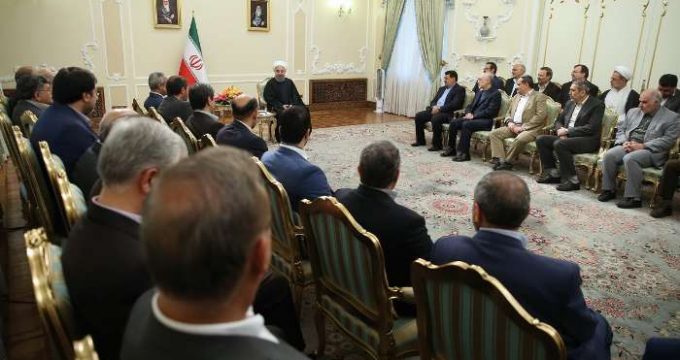 President Hassan Rouhani has made an earnest entreaty to political rivals they should abandon hitting the government as ammunition for election campaign as it would deprive public of their trust upon ballot boxes as the sole cause of the hope for the future.

Essar Oil, a key Indian client of Tehran, more than doubled oil imports from Iran in February compared with the previous month, according to tanker arrival data obtained from trade sources and ship-tracking services on the Thomson Reuters Eikon terminal.

Commandos serving in the Islamic Revolution Guards Corps (IRGC) Ground Force have been integrated into the Rapid Reaction Unit of the Force, a top commander said.

An Iranian-American detained in Iran since last summer has been released on bail of approximately $60,000, the Human Rights Activists News Agency (HRANA) reported Sunday.

Iran commander: US will regret any adventurism

The former head of Iran’s Islamic Revolution Guards Corps (IRGC) has warned the United States against any military “adventurism” after a top US military commander threatened Tehran with military action.

Iran now has in its custody 22 Indian fishermen. They were arrested between  August 2016 and January 2017.

Foreign Ministry spokesman Bahram Qasemi said on Monday that hoisting any flag except Iraq’s national flag in Kirkuk in Northern Iraq, runs counter to the country’s constitution and will mount tension.

According to preliminary reports, ten people were killed by an explosion inside a metro train at the Sennaya Square station in St. Petersburg, emergency services told TASS.

The use of natural gas as a source of energy has been growing rapidly in the past few years and it won’t until 2035 that we reach the natural gas peak in the global energy consumption. While the majority of the energy market remain focused on oil and its current supply glut in the market, it is important to take note that oil had reached its peak in the global energy consumption back in the 80’s and its contribution has been coming down.