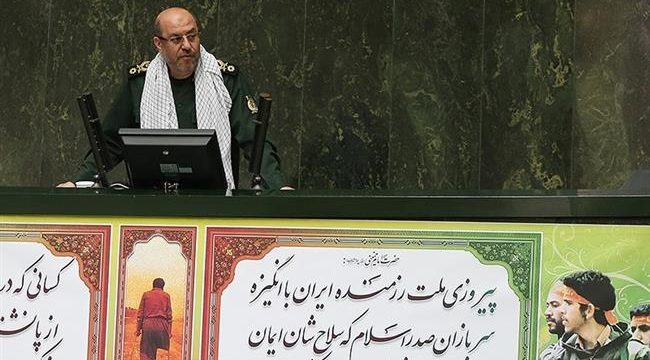 Minister: 3 new missiles to be produced in next few months

Defense minister has announced that three principal missile products will walk into the production area by the end of the Iranian calendar year on March 20, 2017.

Iran and Kenya have emphasized their determination to enhance bilateral cooperation in different areas, particularly in economy.

The Iranian foreign ministry condemned repeated territorial claims raised by the United Arab Emirates (UAE) over the three Iranian islands of Abu Musa, the Greater Tunb and the Lesser Tunb in the Persian Gulf, and blasted Abu Dhabi for its unconstructive policies in the region.

Chief of Staff of the Armed Forces said Sun. that Russians seek to obtain the technology of manufacturing the Iranian long-range drones, capable of targeting positions with one meter square surfaces.

Iran’s Navy Commander Rear-Admiral Habibollah Sayyari announced that Iranian destroyers might dock at Italian ports in the near future.

Omani products to be showcased in Iran from Monday

Omani Products’ Exhibition (Opex) will begin on Monday at Tehran International Exhibition Centre in Iran under the auspices of Eng. Mohammad Reza Nematzadeh, Iranian minister of industry, mines and trade, and in presence of Dr Ali bin Masoud Al Sunaidi, Oman’s minister of commerce and industry.

The Iranian Minister of Petroleum, Bijan Zanganeh, says Iran and Kenya can cooperate in oil and oil products’ supply.

Counterterrorism operations in Iran over the past few months have foiled planned attacks by the Daesh Takfiri group in different parts of the country, including the central province of Semnan, the province’s governor announced.

Iran’s foreign minister says the Al Saud regime is doing everything to keep the support of the United States as the kingdom sees its existence tied to such patronage.