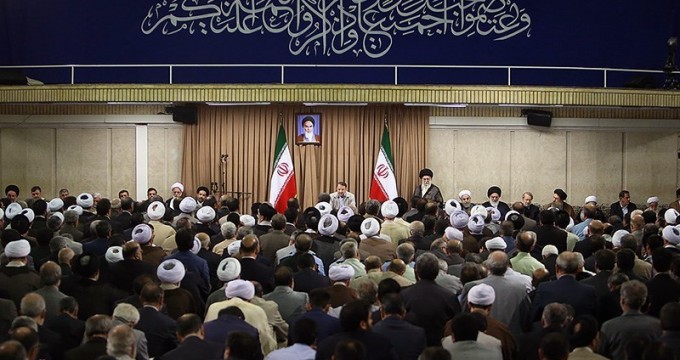 Leader of the Islamic Revolution Ayatollah Seyyed Ali Khamenei says Iran seeks to reach a fair deal with the P5+1 group of countries over Tehran’s nuclear program that will serve the country’s national interests.

Zarif, Kerry due in Vienna for nuclear talks

Iran’s Supreme Leader Ayatollah Ali Khamenei on Tuesday ruled out freezing sensitive nuclear work in the country for a long time and said sanctions imposed on it should be lifted as soon it reaches a final deal with major powers, state TV reported.

Iran after good deal, not bound by time in N-talks: Afkham

Iran says it seeks a “good” nuclear deal with the P5+1 group, stressing that Tehran will not be bound by time in striking a final deal with the six countries.

Iran to agree with extension of nuclear talks in case an ambiguity remains: Nobakht

Government spokesman Mohammad-Baqer Nobakht said Wednesday that if any ambiguity remains that could be removed by extending nuclear talks, Iran will agree with such an extension.

Iranian President Hassan Rouhani said his administration’s foreign policy is based on constructive interaction with the world while it sticks to the country’s red lines.

Iranian Parliament Vice-Speaker Seyed Hassan Aboutorabi Fard underlined the necessity for reaching a nuclear agreement with the world powers which would meet Tehran’s interests, and said the country cannot trust the US and its allies.