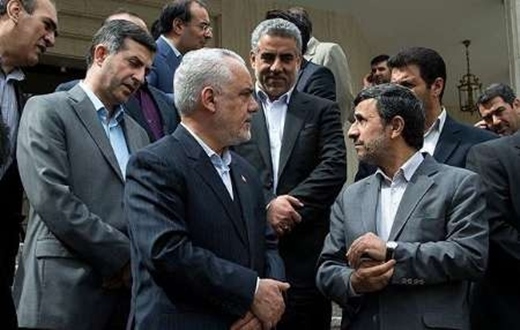 Rahimi, a link in the chain of offenses committed by the Ahmadinejad gov’t

An analytical look at widespread violation of rules by executive officials during the presidency of Mahmoud Ahmadinejad.

Complicity of former First Vice-President Mohammad Reza Rahimi in massive corruption is simply a single page in a chapter of failures to comply with rules and regulations by a government whose leader claimed he was at the helm of the most immaculate administration in Iranian history.

The following is a partial translation of an analytical report the Islamic Republic News Agency released on the glaring offenses committed by the Ahmadinejad government:

In late January the Supreme Court partly upheld the conviction of former First Vice-President Mohammad Reza Rahimi and sentenced him to five years and 91 days in prison. Under the Supreme Court ruling, the former veep, who was initially sentenced to 15 years in jail by the Court of First Instance, has to pay the equivalent of $950,000 dollars in misappropriated money and an additional $330,000 in fines.

Experts suggest the verdict of the Supreme Court amounted to confirmation that when the seventh parliament’s term came to an end, Rahimi who served as the head of the Supreme Audit Court illegally distributed hundreds of thousands of dollars and was complicit in a massive corruption case involving Iran Insurance Company.

Ahmadinejad, who had previously said, “If it is established that Rahimi has misappropriated a single rial, I will appear on TV to apologize to the public and tell them that ‘I don’t deserve to serve as president,’” released a statement to suggest that the conviction of his former right-hand man had nothing to do with the ninth and tenth governments [which he led between 2005 and 2013] and once again hailed the officials who served under him as “immaculate servants”.

That was not the end of the story, though. In a letter, Rahimi revealed that he deposited as much as $400,000 in the bank accounts of 170 candidates running for seats in the 8thparliament. “I fell victim to your obstinacy and measures to bring shame upon others,” he said in the letter.

The case and the finger-pointing that ensued have prompted us at IRNA to take a look at other offenses officials of the ninth and tenth governments committed.

On August 19, 2014 Khaneye Mellat News Agency released a list of offenses the ninth and tenth governments had committed. The report focused on unclassified correspondence between the legislature and the judiciary on offenses committed by executive officials under Ahmadinejad. It said, “The legislature has established that offenses have been committed by executive officials, but the final decision on how to deal with those offenses lies with the judiciary.”

President Ahmadinejad himself is implicated in a case which is being dealt with at Branch 76 of Tehran Provincial Criminal Court.

The report catalogued the executive offenses that the judiciary had to deal with. Chief among them was government failure to pay off the money it owed to Tehran Municipality which was described by the chamber as non-compliance with the law that governed the use of the Foreign Exchange Reserve Fund to promote railway and mass transit.

The far-from-perfect performance of the government in offering the stocks of state firms, withdrawal of money by the Central Bank from the accounts of banks, the way the stocks of Saipa Automaker were sold, multiple state positions for Hamid Baghaei, Ahmadinejad’s vice-president for executive affairs, and the use of foreign exchange at a government rate to import luxury cars were some other offenses mentioned in the report.

President Ahmadinejad himself is implicated in a case which is being dealt with at Branch 76 of Tehran Provincial Criminal Court. One of the charges he faces is built on a complaint filed by the Islamic Consultative Assembly.

Still, supporters of the former president say his claims of immaculacy are valid as they continue to support him. Last month his deputy for parliamentary affairs Mohammad Reza Mir-Tajjedini said, “Ahmadinejad is one of the most popular figures in the history of the country. He is not history. During his presidency managers who cherished values and the governance of the jurisprudence climbed the ladder.” His comments came in response to Ayatollah Alam al-Hoda [a member of the Assembly of Experts who had said Ahmadinejad was history].

According to the Attorney General, individuals have pressed charges against Ahmadinejad too.

In an interview Mir-Tajjedini said, “No corruption has taken place under Ahmadinejad and the former president faces no charges.”

The comments of Ahmadinejad’s deputy came despite the fact that a senior official with Tehran Provincial Criminal Courts said last month that a judicial panel was investigating the case involving the former president.

According to the Attorney General, individuals have pressed charges against Ahmadinejad too. There are widespread speculations as to who has filed a complaint against Ahmadinejad. Some media have reported that the name of a Yaghoub Khalilnejad appeared next to the name of the parliament speaker in a summons sent to the presidential office when Ahmadinejad was still in power.

Apparently, the complaint by Khalilnejad is not similar in nature to that of MPs. He has filed a court case against Ahmadinejad for the words and expressions the former president used in a public speech. According to unconfirmed reports, Khosro Shahin, a Tehran resident who has identified himself as a disabled veteran of the Sacred Defense, is another plaintiff who has filed a complaint against Ahmadinejad for high fatality rates in road accidents.

Budgetary slip-ups of the Ahmadinejad administration

In 2006, the Supreme Audit Court revealed that $1.5 billion in public funds had gone missing and that the government had failed to comply with the provisions of the budget. One year later, the same court reported that $2.3 billion had gone missing and that the executive branch failed to comply with 54 percent of what it was required to do in the spending package. In 2008, the failure margin climbed to 72 percent, but there was no mention of any missing funds.

In 2009 and 2010 government failed to comply with 64 percent of budgetary requirements and according to the budget report of 2011, the figure stood at 65 percent.

In 2006, the Supreme Audit Court revealed that $1.5 billion in public funds had gone missing and that the government had failed to comply with the provisions of the budget.

Another report the Supreme Audit Court released in 2013 [in the final six months of Ahmadinejad’s presidency] suggested that the president kept violating the laws until the final days of his presidency. But the principlist-majority parliament which keeps touting its supervisory role these days had opted for silence back in those days.

Illegal hiring of individuals is another offense the Ahmadinejad administration committed.

Over-the-top bonuses to certain individuals are mentioned in all reports by the court about the budgetary violations of the Ahmadinejad administration. The court has also reported that the provision of the budget law, that caps pay raises and bonus increases and other payments, cash or non-cash to the Cabinet by the national oil and gas companies, has been violated.

Illegal hiring of individuals is another offense the Ahmadinejad administration committed. The head of the Supreme Administrative Justice Court slammed the hiring as illegal and said, “In the absence of permission any hiring by the presidential office is illegal and we have made our opinion known in this regard.”

It should be noted that during the second term of Ahmadinejad’s presidency some 650,000 people were offered permanent, long-term and short-term contracts. In light of the fact that there were no advertisements or tests before the hiring, the employment of some 450,000 of them was illegal. The deputy chief of the presidential office described the new hires as a “provincial corps”.

One can no longer capitalize on populist slogans to draw the public to the polling stations. People build on the practical measures of officials and politicians to pass judgment, not on their words.

The ninth and tenth governments were in office during eight eventful years in the history of the Islamic Republic. Violation of rules and regulations, pervasive financial offenses despite claims to immaculacy and justice, populist measures and the special language executive officials used in that period led to the emergence of a new political insight and popular demands in the country.

One year on, each day a new scandal dating back to Ahmadinejad presidency emerges. One can no longer capitalize on populist slogans to draw the public to the polling stations. People build on the practical measures of officials and politicians to pass judgment, not on their words.

Translated by IFP from IRNA
The Iran Project is not responsible for the content of quoted articles.