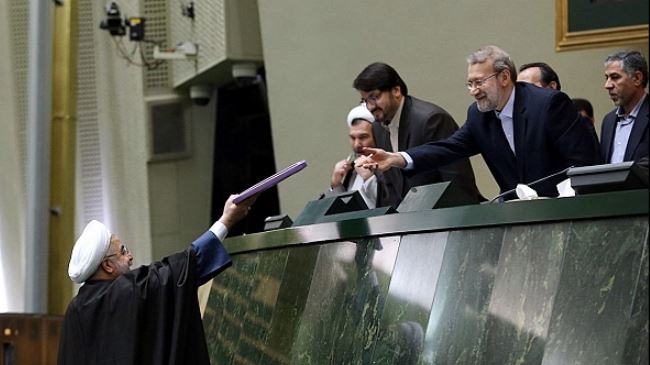 President Hassan Rouhani is in the Iranian parliament (Majlis) to outline the characteristics of his proposed budget bill for the next Iranian year (to start March 21, 2015).

Post reporter charged in Iran after day in court

A Washington Post reporter detained in Iran for more than four months was formally charged Saturday after a day-long proceeding in a Tehran courtroom, the newspaper reported.

Rouhani: Inflation to drop below 20% by end of year

President Hassan Rouhani said that inflation rate will drop to below 20 percent by the end of the current Iranian calendar year (March 20, 2015).

President Hassan Rouhani said here on Sunday that Iran is armed with rationality and logic.

Iran’s Navy commander says that foreign military units should withdraw forces from Iran’s territorial waters in the Persian Gulf where the Islamic Republic is going to conduct its major naval drill.

Iranian President Hassan Rouhani submitted to the parliament the proposed budget bill for coming Iranian calendar year (starting on March 21, 2015) in which the total defense budget has increased by 32.5 percent.

A large number of foreign aviation companies and airlines have voiced their willingness to start operations in the Iranian market after an interim deal was reached between Tehran and the Group 5+1 (the five permanent UN Security Council members plus Germany), a senior trade official announced on Sunday.

Foreign Ministry Spokeswoman Marzieh Afkham said on Sunday that the conditions prevailing in the US points to a clear gap between its claim of democracy and realities in its policy.