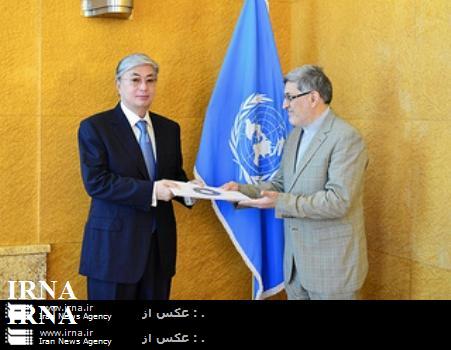 Iran has dismissed a recent report by the United Nations’ special rapporteur on the Islamic Republic’s human rights situation as unsubstantiated and against international norms.

Iran urges int’l support for an end to Syrian crisis

Deputy Foreign Minister for Arab and African Affairs Hossein Amir Abdollahian called for an international effort to help resolve the crisis in Syria by facilitating dialogue among the opposing factions.

Iranˈs Ambassador to Beijing Mehdi Safari said here on Tuesday that President Hassan Rouhani is scheduled to visit China in the next two months.

Iranian Foreign Minister Mohammad Javad Zarif here Tuesday met on the sidelines of the nuclear talks with the Executive Director of the United Nations Office on Drugs and Crime (UNODC) Yury Fedotov.

Iran’s judiciary said Tuesday it is taking unspecified legal action against two opposition leaders held under house arrest without charge since 2011 – a move that possibly comes in response to demands by their supporters that they be given a fair trial to resolve their status.

Similar to other years, Iranians all across the country celebrate the ancient Persian tradition of Last-Wednesday-of-the-Year Fireworks (Chaharshanbeh Souri) tonight as a prelude to Nowruz (the start of the new year).

Iran, Powers end 2nd round; to meet in Goldberg later

Iran and Powers have stopped the second round of nuclear talks and will meet gain in Golberg Hotel later.