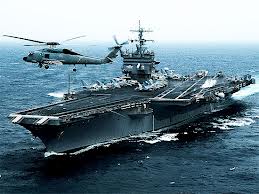 The US has reportedly sent an indirect message to Iran that it would not support an Israeli strike against the Islamic Republic as long as Tehran does not attack Washington’s assets in the Persian Gulf.

A US aircraft carrier

The Israeli daily, Yedioth Ahronoth, reported on Monday that the US has informed Tehran, via two European nations, that it does not intend to back an Israeli strike against Iran’s nuclear facilities.

In return, the US expects that Iran refrains from attacking Washington’s interests in the Persian Gulf including military bases and aircraft carriers.
Highlighting the disagreement between the two countries on the use of force against Iran, was a report about the US downgrading its participation in an upcoming joint missile drill with Israel by significantly cutting its troop deployment and reducing the number and potency of its missile interception systems.

“The reductions are striking. Instead of the approximately 5,000 U.S. troops originally trumpeted for Austere Challenge 12, as the annual exercise is called, the Pentagon will send only 1,500 service members, and perhaps as few as 1,200,” the TIME Magazine reported on Friday, quoting “well-placed sources” within the American government and the Israeli regime.

Meanwhile, US Joint Chiefs Chairman General Martin Dempsey told reporters in London this week that a military strike could damage but not destroy Iran’s nuclear capability, adding, “I don’t want to be complicit if they choose to do it.”

The United States and Israel have repeatedly threatened Iran with a military strike to force it to halt its civilian nuclear energy program, which they claim is a cover for a program aiming to acquire a military nuclear capability.

Iran has dismissed the allegations and the threats, promising a crushing response to any aggression against its territory, warning that any such measure could result in a war that would spread beyond the Middle East.