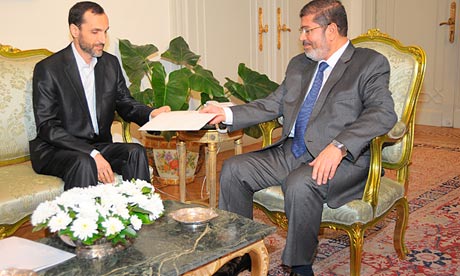 Mohamed Morsi’s Tehran visit, the first by an Egyptian leader since 1979, is part of plan to form regional contact group to broker peace.

Egypt’s new leader, Mohamed Morsi, is due to visit Iran this week, marking a significant step towards rapprochement between the two countries and the start of a new Egyptian initiative to broker a peace settlement in Syria.

Morsi’s participation at the summit of the Non-Aligned Movement of developing countries in Tehran on Thursday will mark the first visit by an Egyptian leader since the 1979 Islamic revolution, and a substantial departure from the foreign policy of the deposed dictator, Hosni Mubarak. Morsi will reportedly stay only a few hours in what will be a largely symbolic trip, but from Cairo’s point of view it is intended to lay the foundations for a new regional effort to stem the deepening violence in Syria. Meanwhile, Tehran is presenting the summit as the failure of western efforts to isolate Iran.

Morsi, who came to office two months ago, has said he wants to form a Syria contact group made up of Egypt, Saudi Arabia, Turkey and Iran – bringing together the most powerful Sunni backers of the Syrian rebels with President Bashar al-Assad’s only significant ally in the region, the Shia regime in Tehran.

Before his Tehran trip, the Egyptian president is due to hold talks in Beijing on Tuesday with the Chinese government, which has hitherto stood alongside Russia in opposing punitive measures against the Assad regime at the UN security council.

However, Peter Harling, a Syria expert at the International Crisis Group, said that in light of the failure of the UN and Arab League to make any diplomatic progress, any new effort is worthwhile at a time when hundreds of casualties are being reported each day.

“Given how desperate the situation is and the need for some movement on the political front, it’s a welcome initiative,” Harling said. “In the past, the US opposed any participation of Iran in the contact group, but it makes sense to include Iran in any negotiated transition. Tehran has much to lose, and it can cause damage in the region if it is excluded. It is just diplomatic common sense.”

President Assad met with Iranian officials in Damascus on Sunday and was quoted on Syrian state media as saying his regime would carry on fighting “whatever the price”. The intensity of the conflict has dramatically increased in recent weeks, culminating in a government offensive on Daraya on the south-western edge of Damascus.

Various opposition claims have put the death toll in the town at between 300 and 600, many of them civilians, from three days of heavy shelling and then a ground attack on Saturday, when troops and allied militiamen went from door to door.

If the reports are verified, it would be the worst massacre of the 17-month long conflict, which began in March last year with initially peaceful anti-regime protests. Official restrictions on independent press coverage make it hard to confirm the casualty figures but independent witnesses spoke of seeing scores of bodies in Daraya and video footage which emerged on Monday showed mass burials.

More video footage from Damascus on Monday showed a Syrian military helicopter plummet to the ground in flames. The opposition claimed it was brought down in fighting with government forces in the capital. The Syrian official news agency confirmed the crash but gave no details.