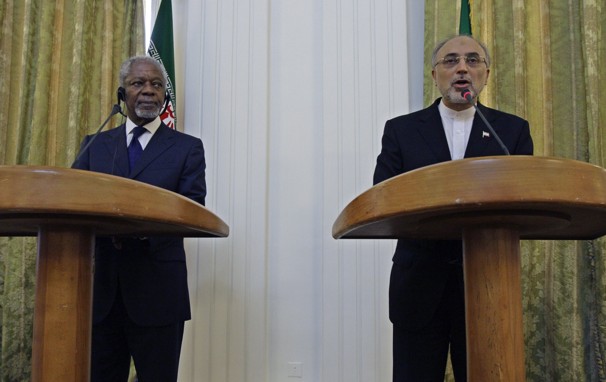 (Reuters) – Iran has launched its latest diplomatic initiative to resolve the intensifying conflict in Syria, warning that the abrupt fall of president Bashar al-Assad would have catastrophic consequences for the country.

At least 12 nations with “a correct and realistic position” would attend a meeting on Thursday in Tehran to discuss the conflict, a senior Iranian diplomat said this week, indicating that no nation that backs the opposition and calls for Assad to leave power would be present.

Russia – which along with Iran has strongly supported Assad since the crisis erupted 17 months ago – has said it will attend the meeting at ambassadorial level but it was unclear which other key players would be present.

Iranian media has reported that China would also be present, along with Algeria, Tajikistan, Venezuela, Pakistan, India and six members of the Arab League but there was no independent confirmation.

In an opinion piece published by the Washington Post on Wednesday, Iranian foreign minister Ali Akbar Salehi warned that the fall of Assad would catastrophic consequences for the countries.

“Syrian society is a beautiful mosaic of ethnicities, faiths and cultures, and it will be smashed to pieces should President Bashar al-Assad abruptly fall,” it read.

While Salehi said Iran sought a solution that was in “everyone’s interest”, Western diplomats have dismissed the conference as an attempt to divert attention away from bloody events on the ground and to preserve the rule of Assad.

“The Islamic Republic’s support for Assad’s regime is hardly compatible with a genuine attempt at conciliation between the parties,” said one Western diplomat based in Tehran.

It showed Iran was “running out of ideas”, he added. Another Western diplomat said Tehran was trying to broaden the support base of the Syrian leader.

Along with Russia and China, Iran has strongly supported Assad whose forces have launched crushing operations against anti-government protesters and armed opposition groups since the crisis erupted 17 months ago.

The Islamic Republic has resisted an agreement on Syria that requires Assad to quit as part of any political transition. There is no sign that Tehran is ready to adopt a new approach, despite setbacks for Assad including the defection this week of his prime minister.

But analysts say the recent signs of cracks in the Syrian leadership have taken Iran by surprise.

“Iran is trying to show strength and regional presence, but if they were going to make a big play why not do it at the Non-Aligned Movement summit (taking place in Tehran in late August)?” said Scott Lucas of the EA Worldview news website that specializes in covering Iran.

“They seem to be so jittery about Syria, they couldn’t afford to wait,” he added.

“Iran wants to co-ordinate efforts among countries that don’t accept the Western and Saudi approach to Syria,” said Mohammad Marandi of Tehran University. “It’s a counter-force to the so-called Friends of Syria gathering.”

Iranian involvement in the crisis has been complicated by the seizure by rebels of 48 Iranians in Syria on Saturday on suspicion of being military personnel. Tehran has said they were pilgrims, but acknowledged that some of the men were retired soldiers or Revolutionary Guards.

Iranian officials have engaged in intensive diplomatic efforts in the region this week.

On Tuesday, while Foreign Minister Salehi was in Ankara trying to maintain relations, the head of Iran’s Supreme National Security Council Saeed Jalili was in Damascus to reassure Assad of Tehran’s support.

“They’re in chaos in terms of the bureaucracy. There have been lots of statements but no-one’s co-ordinating it,” said EA Worldview’s Scott Lucas.

The meeting comes just days before a meeting of the Organisation of Islamic Cooperation set to focus on Syria. In recent days Iran has warned the Muslim world of the threat posed to it by the United States.

“In the new plan that the Americans have provided for the Middle East, they have foreseen changes for all countries,” Iran’s state news agency quoted Ahmadinejad as saying on Wednesday.

“I am certain they have plans for changes in Saudi Arabia as well … they do not want Muslim countries to have power and in opposition we must stand together more than before,” he added.