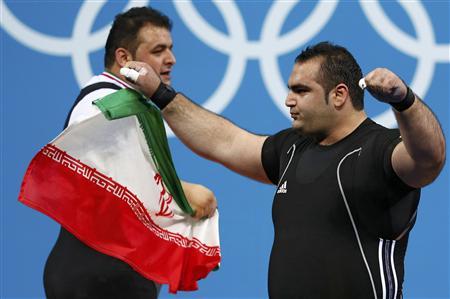 (Reuters) – Iran’s Behdad Salimikordasiabi won gold in the headline event of the London Olympic weightlifting competition on Tuesday to claim the title of strongest man at the Games.

His fellow countryman Sajjad Anoushiravani Hamlabad took the silver to seal a one-two that delighted a crowed packed with Iranian supporters and asserted the country’s dominance in the Games’ ultimate test of strength.

“In Iran I know they’re all partying in the street already,” Salimi said smiling and holding a permanently ringing mobile phone in one hand.

There was a party atmosphere in the ExCel arena too where dozens of Iranian flags were unfurled while whistles blew and air horns parped to the beat of the chant “Ir-an, Ir-an”.

After receiving their medals, the lifters left the platform to embrace friends in the crowd accompanied by the hugely popular two-time Olympic champion Hossein Rezazadeh, now president of the country’s weightlifting federation.

The 22-year-old world and Olympic champion, known as “Salimi”, took victory with two lifts to spare when the challenge of Russia’s Ruslan Albegov faded.

“I represented the last opportunity for the Russian team. I tried the best I could,” Albegov said, reflecting on a disappointing weightlifting competition that returned five silver medals and a bronze, but no gold, from their 10-strong squad.

The winning total of 455kg comprised a 208kg lift in the snatch round and a 247kg clean and jerk.

That put him 6kg ahead of silver medallist, training partner and fellow countryman Anoushiravani who joined him on the platform at the end of the competition to hoist an Iranian flag.

Salimi was tied with Russia’s Albegov at the halfway stage after both completed snatch lifts of 208kg, but the Iranian was too strong in the clean and jerk discipline where his first lift proved enough to beat off the rest of the field.

The crowd roared their approval as Salimi then attempted a 264kg clean and jerk that would have taken the world record from Rezazadeh, who was cheering on from the technical area by the stage.

However the lift proved too much and after failing his first of two possible attempts, with gold already secured, he unbuckled his belt and remained on the platform to lap up the applause of a crowd featuring a large and noisy Iranian contingent.

Salimi later told reporters that a lengthy gap between lifts had allowed his body to go cold and affected his ability to make the lift.

Beijing Olympic champion Matthias Steiner did not finish the event after receiving a blow to the head from the falling bar when his arms buckled on a 196kg snatch attempt. Germany’s Steiner left the stage on his feet, raising a hand to acknowledge the cheers of the crowd.

“He is OK but was not able to continue with the competition for medical reasons. I do not think it is very serious, but the doctors are checking him over,” said Germany’s Olympic mission chief Michael Vesper.