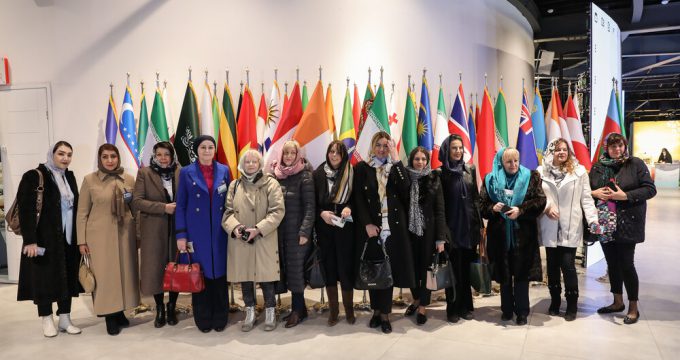 The First International Congress for Women of Influence was held in Tehran on Friday with female guests including wives of heads of state, ministers, vice presidents, and parliamentarians from Burkina Faso, Kyrgyzstan, Serbia, Guinea, Niger, Nigeria, Sri Lanka, Syria, Turkmenistan, and Armenia.

An exhibition showcasing the achievements of successful Iranian women was held on Friday on the sidelines of the First International Congress for Women of Influence.

In this exhibition, the achievements of Iranian women entrepreneurs in various fields such as electricity and electronics, medical equipment, technology, innovation centers, and home businesses were on display.

In this regard, 900 female CEOs of knowledge-based companies have been identified, 100 of them were selected as the best in the field of science and technology, and finally, the top 50 participated in this exhibition, ISNA reported.

The event aimed to appreciate women of influence, support and help them grow, and promote their creativity and ideas.

Addressing the congress on Thursday, President Ebrahim Raisi said: “I hope that the women present in this meeting will be able to use the valuable experiences that the Islamic Republic of Iran gained after the Islamic Revolution in the field of women’s rights and attention to women in society.”

Fortunately, more than 30 percent of university professors, more than 34 percent of experts in the field of medicine and healthcare, almost 60 percent of the capacity of scientific and academic centers, as well as 30 percent of managerial positions belong to women in the country, Raisi added.

Also, the number of Iranian women who gain championships in various domestic and international sports fields is more than ever, he noted.

The president also pointed to the influential role of Iranian women in the economy and entrepreneurship, saying: “We believe that women can be effective in various scientific, economic, political, cultural, social and sports fields alongside men.”

Referring to the fact that despite claims, women’s rights are violated in many cases in Western countries, Raisi said that according to the statistics, many women are killed by the police in these countries every year just for the crime of demanding their rights.

“The reason why today the Islamic Republic of Iran is angered by these countries is because it has presented a new way of life by preserving the principles and values of the women of the society who have been able to reach high cultural, political, social and sports peaks.”

In the Islamic Republic of Iran, we have always emphasized in the laws and regulations related to women that the protection of women’s rights and the issue of family formation should be given special attention, he stressed.

The Leader of the Islamic Revolution, Ayatollah Seyed Ali Khamenei, met with a group of prominent Iranian women on January 4, castigating the “decadent Western culture” and its crimes against women.

“On the issue of women, our stance towards the hypocritical Western claimants is a position of demand, not the defense. There was a time many years ago, when a number of students at a university asked me, ‘What do you have to say for yourself in defense of such and such a case?’ I told them, ‘I don’t have a defense. I have an attack.’ That is how it is with the issue of women. The world is to blame. When I say ‘the world’ I mean the Western world, Western philosophy, and the existing Western culture. Of course, [what I am talking about] is the modernized West. I am not concerned about the historical West.”

Ayatollah Khamenei then pointed to Islam’s view toward women. He said, “Unlike the deeply patriarchal Western capitalist system, in Islam, both men and women are prominent and have legal, intellectual, theoretical, and practical privileges. But the Westerners untruthfully attribute their inherent patriarchy to Islam.”

The National Headquarters for Women and Family Affairs has approved six plans to support families and empower women and improve their status in society.

The formation of a loan guarantee fund for women heads of households was one of the plans of the National Headquarters for Women and Family Affairs.

Due to the fact that many female breadwinners could not use business loans due to the lack of a guarantor, the fund was established to help them.

The national budget bill for the next Iranian calendar year 1402, which starts on March 21, has increased the budget for women’s affairs by over 50 percent compared to the current year’s budget.