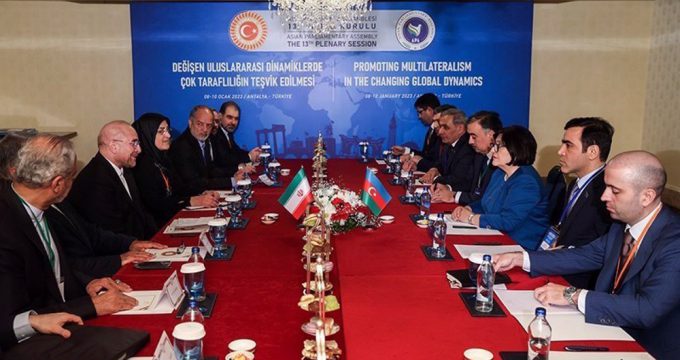 Iran’s top parliamentarian says the country will never accept any geopolitical change to borders in the Caucasus region and rejects any intervention in that region by extraregional countries.

Mohammad Baqer Qalibaf made the remark in a Monday meeting with Sahiba Gafarova, the speaker of the National Assembly of Azerbaijan, on the sidelines of the 13th session of the Asian Parliamentary Assembly (APA) in the Turkish city of Antalya.

Referring to the importance of Tehran-Baku relations in various political, economic and parliamentary fields, Iran’s parliament speaker said, “The neighboring country of Azerbaijan has special conditions from the Islamic Republic of Iran’s viewpoint… and the two countries seek to further deepen their relations.”

“We can have good relations at regional and global levels. The closer regional countries get to each other, the better it would be for the region and no extraregional countries should be allowed to interfere in this regard,” Qalibaf said.

He emphasized, “We [in Iran] do not accept any geopolitical change in [regional] borders.”

Gafarova, for her part, called for closer cooperation between the Republic of Azerbaijan and the Islamic Republic of Iran at international level.

“The factors that bring the two countries close together are not solely geography and propinquity at borders, but we are two Muslim countries and many people in Iran speak the Azeri language,” she said.

The Azeri minister emphasized that his country supports peace and security and seeks stability in the region.

The Asian Parliamentary Assembly is among the most important institutions in Asia, which plays an important role in promoting multilateralism.