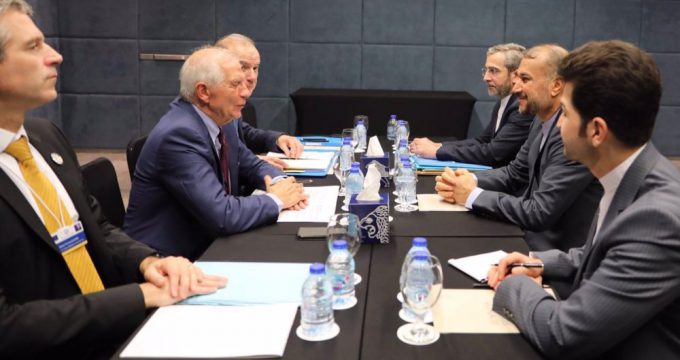 Iranian Foreign Minister Hossein AmirAbdollahian and European Union foreign policy chief Josep Borrell has met in Jordan amid stalled talks to revive the 2015 nuclear agreement, which was abandoned by the United States three years after its conclusion.

The top Iranian nuclear negotiator and the EU official coordinating talks to salvage the nuclear deal, formally known as the Joint Comprehensive Plan of Action (JCPOA), held talks in the Jordanian capital Amman on Tuesday.

Iran’s lead negotiator Ali Bagheri Kani and the talks’ coordinator Enrique Mora were also present in the meeting, which was held ahead of a regional conference hosted by Jordan.

No further details were provided about the meeting.

The talks to salvage the JCPOA kicked off in the Austrian capital of Vienna in April last year, with the intention of examining Washington’s seriousness in rejoining the deal and removing anti-Iran sanctions.

The talks have remained stalled since August, as Washington continues to insist on its hard-nosed position of not removing all sanctions that were slapped on the Islamic Republic by the previous US administration. Iran maintains that it is necessary for the other side to offer some guarantees that it will remain committed to any agreement that is reached.