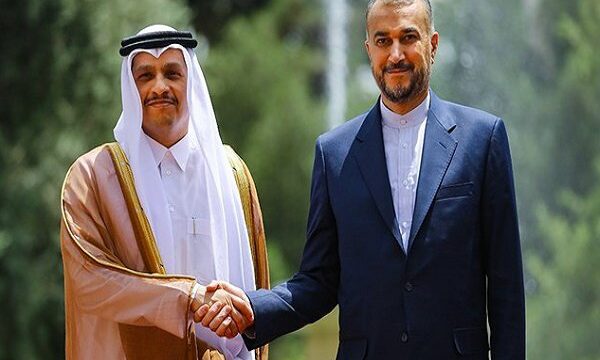 During a phone conversation on Thursday night, Iran’s top diplomat Hossein AmirAbdollahian and his Qatari counterpart discussed several issues including Tehran-Doha bilateral relations, as well as the 2022 World Cup which is underway in Qatar.

Conveying the greetings of the Iranian President to the Emir of Qatar, AmirAbdollahian congratulated the Qatari government and people on the successful hosting of the World Cup matches.

The top Iranian diplomat also appreciated the cooperation of the Qatari government regarding the presence of Team Melli fans in the football matches.

Qatari foreign minister, for his part, also conveyed the greetings of the Emir of Qatar to the high officials of the Islamic Republic of Iran and praised the performance of Iran’s national team in the Qatar World Cup. He also appreciated Iran’s active cooperation in the 2022 World Cup hosted by the Qatari government.

The Iranian squad said goodbye to the World Cup by gaining three points (one win and two losses) as well as scoring four goals and receiving seven goals.