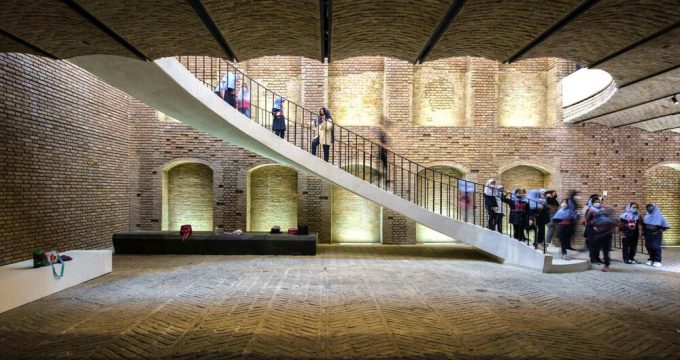 The Argo Contemporary Art Museum and Cultural Center in Tehran has been selected as the cultural building of the year at the 2022 Dezeen Awards.

The world’s 57 best buildings were competing in different categories for this year’s Dezeen Awards, which are given by Dezeen, an influential, London-based architecture and interior design magazine.

The Argo museum received the award in the cultural building category.

The Ahmadreza Schricker Architecture North studio was commissioned by the Pejman Foundation to transform the Argo Factory, an abandoned 1920s brewery, into a contemporary art museum to house the non-profit foundation’s art collection and to revitalize Tehran’s downtown district.

The building features five concrete roofs which echo neighboring buildings and an observation deck that surrounds the building’s original chimney.

“It is a bold adaptive reuse of a historic structure in the center of Tehran and proposes a purposeful future use, which is inclusive, which respects the past while being forward-looking, and which invites people to enjoy both the architecture and the content of this new cultural space,” said the Dezeen judges.

Designed during the challenging Iranian socio-political climate spanning the years between 2017 and 2020, this project has been influenced by the brutal sanctions, travel bans and incredibly isolating experience of the global pandemic.

With an emphasis on local sustainability and native craftsmen, a “Collective Intimacy” was realized among designers and architects to create this unique space that welcomes visitors to the city of Tehran.

The architect’s aim in designing it was to create a dialogue between old and new by inserting a new foundation and metal framing to support the floating concrete floors and roofs independently of the original exterior walls. Restored brickwork is emphasized by deeply recessed tuckpointing. Former basement brewing pools have been converted into sunken galleries.

The Argo center was previously shortlisted for the 2022 Aga Khan Award for Architecture, however, it failed to win the prize.

Poonehzar-Farm, a seasonal space hosting people in the heart of nature on a rural farm in Fars Province, was another Iranian project nominated for the Dezeen Awards in the landscape project section. Designed by Shid Architects, the structure did not win an award.