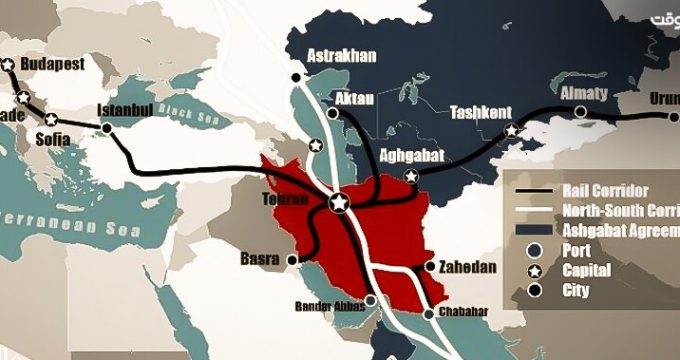 For thousands of years, Iran has been an important route for the transit of foreign goods due to its geopolitical position. The country played a significant role in transporting commodities from west to east as one of the main stations along the ancient Silk Road.

In the modern day, this huge capacity, however, became dormant due to war, political conflicts, and sanctions and consequently lack of infrastructure, however, now the global conditions are changing in Iran’s favor and new opportunities have appeared on the horizon.

The Ukraine war, despite its grave consequences for many countries, has presented Iran with a golden opportunity to realize the long-awaited goal of becoming the global transit hub it once was.

The row between Europe and Russia over the Ukraine war, which resulted in harsh sanctions being imposed on the country, cornered the Russian government economically and many European countries closed their borders on Russian goods making it very hard for its traders to be able to access their destination markets. As a result, the country started looking for new ways for distributing its goods across the world, especially in Asia and the International North-South Transit Corridor (INSTC) once again came under the spotlight.

The agreement for launching INSTC was signed by Iran, India, and Russia in 2000, however, despite all the interest and hype, the attention to the route faded in time due to geopolitical hurdles including the global economic stagnation, the U.S. sanctions on Iran, the conflict in Karabakh, and the pandemic.

Now the multi-modal network of ships, rail, and roads is once again gaining its importance, as the most important trade link between Asia and Europe.

According to official data, one of the major advantages of this transportation route is that the cost of transporting goods through this corridor is cheaper 30 percent. It also halves the time it takes to transport Indian goods to Russia via the Suez Canal.

Iran can use this transit route to distribute European commodities in the shortest possible time and at a lower cost than other routes to the Indian Ocean and the Persian Gulf.

It is predicted that after the full operation of INSTC, Iran will be able to earn $20 billion in transit profits annually, something helping it reduce its dependence on oil revenues amid the American ban on the sector.

The Islamic Republic has been taking serious measures for the development of its railway network as well as its ports and shipping infrastructure in order to encourage more countries to join the project.

Using the capacities of INSTC, Iran will be able not only to expand the volume of trade with Russia and the countries of the region, it can also gain a huge share of the mentioned countries’ annual transit.

Currently, Russia has proposed to take part in some railway projects in Iran in order to accelerate the development of the Islamic Republic’s railway network along the mentioned route.

Last week, Igor Yevgenyevich Levitin, aide to the president of the Russian Federation, visited Iran on top of a high-ranking delegation to meet with Iranian Transport and Urban Development Minister Rostam Qasemi and discuss the expansion of transport ties.

According to the Iranian Transport Ministry, Levitin was tasked by Russian President Vladimir Putin to take the necessary measures for the implementation of Iran’s Rasht-Astara railway and the signaling of the country’s Incheh Borun-Garmsar railway line (both of which are along the INSTC route).

Besides linking India to Europe via this corridor, Iran can connect Central Asia to the Indian Ocean and the Persian Gulf. Landlocked countries in Central Asia can use the corridor’s railway to access the high seas. Over time, Iran’s place in the corridor would become known to all.

Kazakhstan, Turkmenistan, Turkey, Iraq, and Afghanistan have also shown interest in joining the huge project by linking their railways to that of Iran.

Earlier this month, Kazakhstan reached an agreement with the Islamic Republic of Iran for using the country’s rail network and the southern Shahid Rajaee Port for transiting goods to the Central Asian and Commonwealth of Independent States (CIS) regions.

Iran has also been seeking to join its railway with Iraq in order to use the Arab country to facilitate access to the Syrian market, this way Syria can also be somehow linked to the INSTC.

The rail and sea route can also join the Chinese Road and Belt project, which seeks to revive the ancient Silk Road. As one of Iran’s major trade partners China has also shifted to Central Asia and the Caspian Sea to transit its goods to Europe after the eruption of the Ukraine crisis and Iran could play a significant role in delivering Chinese goods to their destinations.

The current international conditions have presented Iran with a proper opportunity to play a bold role in the broader implementation of the INSTC and to transform into a regional trade hub by developing its rail and transit infrastructure.

Given the lower costs and shorter time of trade via this route, Iran can become the main trade link between Asia and Europe and effectively neutralize the U.S. measures aimed to isolate the Islamic Republic from the global economy.