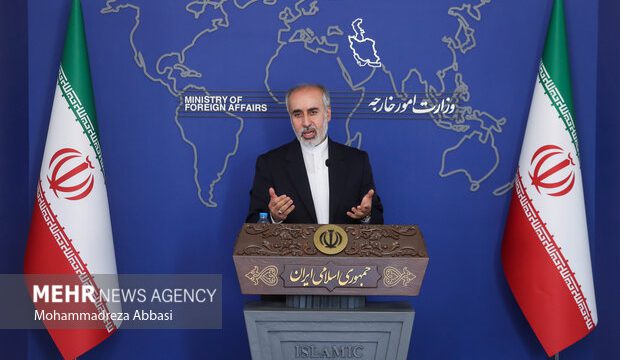 Anti-Iran res. at IAEA’s BoG not to resolve safeguards issues

The Iranian Foreign Ministry Spokesman said that the act of issuing an anti-Iran resolution at the International Atomic Energy Agency (IAEA)’s Board of Governors will not help resolve problems on ‘safeguards’ issues.

Speaking in his weekly press briefing on Monday among domestic and foreign reporters, Nasser Kan’ani expounded on the latest developments in the foreign policy of the country in international arenas.

In response to a question about whether the Ministry of Foreign Affairs has provided the documents of those who have created riots and violence in Iran to other countries, he said that behavior of these countries will certainly be monitored by Iran, the issue of which will be prosecuted judicially within the framework of rules and regulations.

In response to a question about the visit of the Iranian delegation to Vienna and the possible resolution against Iran, he said that direct and indirect talks between the Atomic Energy Organization of Iran (AEOI) and the IAEA still continue and a delegation of the country has traveled to Vienna.

Elsewhere in his remarks, Kan’ani pointed to the EU’s anti-Iran statement and stated that the country is, unfortunately, witnessing the hasty and unconstructive behavior of European countries and it is a matter of regret to say that, as technical talks are ongoing with the Agency, the country is witnessing such illogical measures by European countries, so that issuance of anti-Iran resolution at IAEA’s Board of Governors will cause problems ahead of Iran’s technical cooperation with the Agency.

Iran not to remain silent about threats to its territorial security

In response to a question on Iran’s artillery attack on Iraq’s Erbil, he stated that Iran will not remain silent about the threat to its territorial security especially border threats and separatist groups, and will defend its security with utmost all power.

Elsewhere in his remarks, the Iranian Foreign Ministry Spokesman pointed to the talks between Iran and Saudi Arabia and stated that talks between the two countries with Iraqi mediation are underway.

Iran has presented its positions many times, he said, adding that Iran adheres to the policy of active neutrality regarding Ukraine, due to the good relationship with the two countries. “We tried to bring the two sides back on the right track to resolve differences.”

Iran emphasizes friendly relations with other countries, the issue of which has been put atop agenda of the 13th government under President Raisi.

Iran is not a member of any military alliance, but when it sees its national security in danger, it will react harshly. Iran tries to play a positive role in the case of Ukraine, he added.

Regarding the Vienna negotiations, he said that Iran has taken giant steps in this respect to reach a final agreement with the world’s six major powers. Iran has taken constructive initiatives to advance the dialogue process and conclude the agreement.

Efforts to maintain the course of negotiations continue, he continued.

With regard to the issue of Lebanon, he said that Iran-Lebanon cooperation is friendly, so that imposition of unilateral policies against Lebanon is not legal.
Iran sees no right for the Zionist regime but welcomes any move that leads to the realization of the rights of the Lebanese people

Regarding the delineation of maritime borders between Lebanon and the Zionist regime, Kan’ani said that Iran’s view of the Zionist regime is clear, so that Iran does attach legitimacy to the regime, but it welcomes any event that leads to the realization of the rights of the Lebanese people. The Zionist regime only understands the language of Resistance, and the Resistance has provided Lebanon with a good capacity.