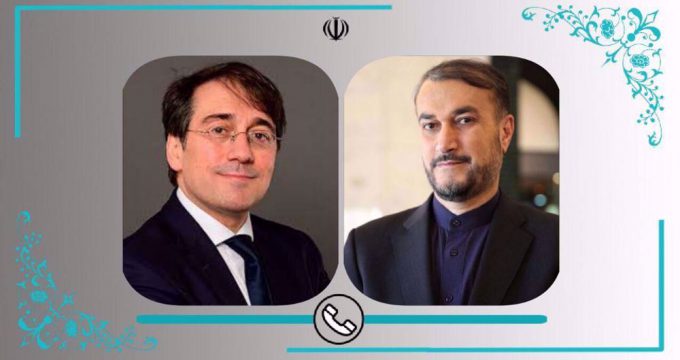 Iranian Foreign Minister Hossein AmirAbdollahian has lambasted the “unconstructive” positions and actions of some Western states regarding the nationwide riots and terrorist attacks in Iran.

AmirAbdollahian said in a phone conversation with his Spanish counterpart José Manuel Albares on Friday that some European officials proved during the unrest across Iran that they are after their “partisan goals rather than the national interests of their country.”

Riots broke out in Iran in mid-September after the death of Mahsa Amini. The 22-year-old fainted at a police station in Tehran and was pronounced dead three days later in hospital. An official report by Iran’s Legal Medicine Organization concluded that Amini’s death was caused by illness rather than alleged blows to the head or other vital body organs.

Rioters went on rampage across the country, brutally attacking security officers and causing massive damage to public property as Western powers, especially the United States, provided support. The European Union and some western countries have imposed sanctions on Iran over its approach toward the recent riots.

Earlier in the month, Iran’s Intelligence Ministry said the United States and the United Kingdom were “directly” involved in the unrest, adding that dozens of terrorists affiliated with the Israeli regime and anti-revolution groups have also been detained in the unrest.

Elsewhere in his phone conversation, Amir-Abdollahian referred to the diplomatic efforts to salvage the 2015 Iran nuclear deal, saying, “We always welcome interaction with Europe. This is while the three countries of Germany, France and England have since 2018 not been able to implement the nuclear agreement, which was an international obligation, after the imposition of sanctions by the Trump administration.”

The top Iranian diplomat also pointed to the historical relations between the two countries and welcomed the further expansion of Tehran-Madrid ties.

He appreciated the position of Spain in condemning the recent terrorist attack in the southern city of Shiraz.

The Spanish foreign minister described the relations between the two countries as “historic” and underlined the necessity of dialogue.