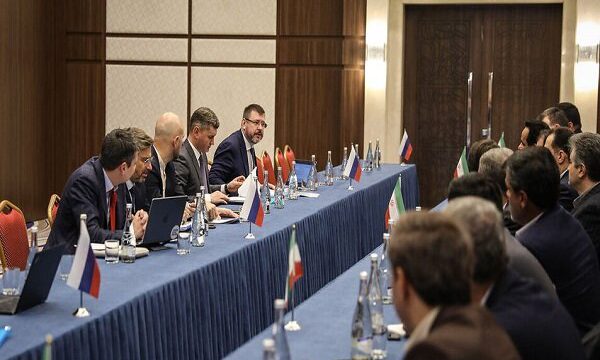 The meeting of the working groups of the 16th Joint Economic Commission of Iran and Russia started in Grozny, Chechnya, in the presence of experts from different working groups to examine the capacities of cooperation.

The meeting of working groups of oil and gas, banking and finance, transportation, information technology, trade and investment, business groups, science and education, energy, standards, sports, customs, agriculture, and industry began this morning (Sunday, October 30, 2022) in the presence of experts and representatives of Iranian and Russian ministries and organizations to examine the capacities of developing relations and prepare the final cooperation documents.

The meeting of various working groups will continue in the morning and afternoon in two sessions in order to negotiate the text of the final protocol of the joint commission of economic partners of Iran and Russia.

The meeting of the deputies of the joint commission for economic cooperation between Iran and Russia will be the final part of today’s plans for the meetings of the two sides.

The final summaries for the preparation of cooperation documents and the writing of the final draft of the protocol of the Joint Economic Cooperation Commission will be done on Monday in the presence of experts and deputies of Iranian and Russian ministries and organizations.

Iranian Minister of Petroleum Javad Owji, as the head of the Permanent Committee of the Islamic Republic of Iran and the Russian Federation, will leave for Russia on Monday with a delegation to attend the 16th meeting of the joint commission and sign the final protocol of the commission.

According to the agreements of the two sides, during the holding of the 16th Tehran-Moscow Economic Cooperation Commission in Russia, negotiations on the roadmap for economic cooperation between the Islamic Republic of Iran and the Russian Federation and the signing of the aforementioned document will be held.

More than 50 experts and deputies of Iranian ministries and organizations have traveled to Russia in the form of a delegation of the Islamic Republic of Iran to attend the meeting of the Economic Commission of Iran chaired by Javad Owji, Minister of Petroleum. Meanwhile, the Russian side is chaired by Alexander Novak, Deputy Prime Minister of Russia. More than 150 people from the public and private sectors participated in this meeting in the form of different working groups.