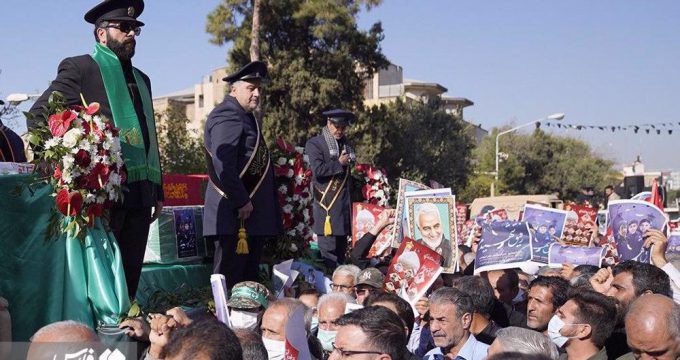 Tens of thousands of people from different walks of life have taken part in a funeral procession for the victims of a terrorist attack on the holy shrine of Shah Cheragh in the southern Iranian city of Shiraz.

The massive ceremony started on Saturday morning with a number of high-ranking state and military officials in attendance.

The participants held up pictures of the victims and chanted slogans against the United States, Israel, Saudi Arabia, and Britain for their support of the Daesh terrorist group.

They also demanded that those behind the vicious act of terror must be held accountable as soon as possible.

Following the funeral procession, the coffins are going to be flown to the northeastern city of Mashhad, which houses the mausoleum of the eighth Shia Imam, Ali ibn Musa al-Reza, where mourners will bid farewell to the victims.

After Friday prayers, Iranians from all walks of life took to the streets across the country, including the capital Tehran, to condemn the terrorist attack on Shah Cheragh holy site.

They waved signs and chanted slogans asking for the prosecution of the perpetrators.

A heavily-armed terrorist assaulted the well-known shrine at approximately 5:45 p.m. local time (1415 GMT) on Wednesday, just before the evening prayers,  killing 13 pilgrims — including a lady and two children — and injuring at least 40 others.

The attacker opened fire indiscriminately on visitors within the shrine, according to the police commander of Fars province. The perpetrator was wounded and taken into custody by security personnel. He later succumbed to his wounds.

Leader of the Islamic Revolution Ayatollah Seyyed Ali Khamenei has offered condolences to the Iranian nation, assuring that the perpetrators of the “outrageous” crime will definitely face punishment.

Chief commander of Iran’s Islamic Revolution Guards Corps (IRGC) said Saturday the United States and Israel have hatched a sinister plot to incite the recent riots across the country.

Addressing the funeral procession in Shiraz, Major General Hossein Salami said the US, Israel, and Saudi Arabia are desperate about their back-to-back defeats in West Asia, including in Yemen.

The senior commander stated that those behind Iran’s riots cannot tolerate the Islamic Republic’s political and spiritual influence across the region, and have therefore resorted to provoking unrest inside Iran, but to no avail.

He said Washington has a long history of making attempts to weaken Iran, stressing that the Islamic Republic has successfully overcome hurdles caused by inhumane US sanctions.

“The Iranian nation has well proven that the US cannot do a damn thing,” Major General Salami said, emphasizing that Pentagon officials did not dare to respond when the IRGC targeted the US-run Ain al-Asad in Iraq’s western province of Anbar on January 8, 2020, after launching a wave of attacks to retaliate against the assassination of top Iranian anti-terror commander Lieutenant General Qassem Soleimani.

The IRGC chief stressed that the Iranian nation is inspired by Imam Hussein (AS), the third Shia Imam and the grandson of Prophet Mohammad (Peace be upon Him), and his companions in the fight against tyranny.

“The Islamic establishment is deeply-rooted in the hearts and minds of the Iranian nation,” Major General Salami said, calling on young Iranian rioters not to sell their honor to American statesmen.

“My advice to rioting students is: ‘Return to the nation, don’t play into the hands of enemies,” he said.

“Those flouting hijab and harassing veiled women are following the path of enemies. This ominous plot of riots in Iran has been constructed in US command rooms.

We (Iranians) will bury US pipedreams in this land. We also warn Saudi rulers to think about the repercussions of their actions,” the high-ranking Iranian military commander also noted.