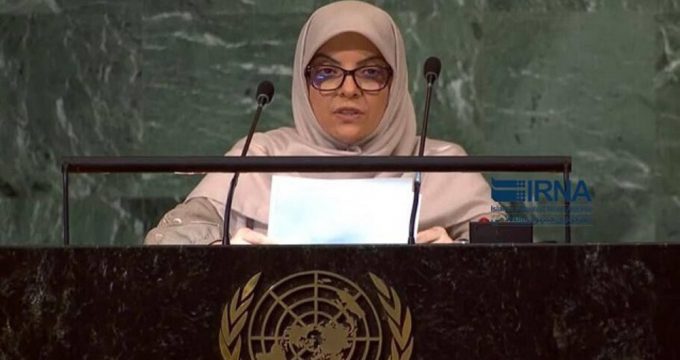 Iran: US in continued contravention of ICJ’s sanctions ruling

A senior Iranian diplomat laments that the United States is in continued contravention of an International Court of Justice (ICJ) ruling that obliges Washington to lift its illegal anti-Iran sanctions on vital exports to the Islamic Republic.

Zahra Ershadi, Iran’s deputy permanent representative to the United Nations, made the remarks before a meeting of the world body’s General Assembly on Friday.

The United States returned the sanctions in 2018 after leaving a 2015 nuclear accord between Iran and other countries.

On October 3, 2018, the ICJ issued an order that temporarily but unanimously required the US to remove any impediments on the importation of foodstuffs as well as medicines and medical devices to Iran and also ordered Washington to ensure that the licenses and necessary authorizations are granted and that payments and other transfers of funds are not subject to any restriction in so far as they relate to the aforementioned goods and services.

“The United States refuses to implement the International Court of Justice’s temporary ruling [that demands it to] refrain from exercising [its] sanctions concerning [imports of] foodstuffs and medicine against Iran,” Ershadi likewise said in a statement.

The envoy reminded that, in line with the verdict, the US also has to remove any obstacles that it has created in the way of Iran-headed imports of agricultural products as well as spare parts, equipment, and services that are needed by Iran’s aviation sector.

Washington, she added, even resorted to levying a new bout of sanctions against Tehran, especially during the outbreak of the deadly coronavirus.

Iran has on several occasions brought the US non-compliance with the order to the court’s attention, she noted.

The answer provided by the US in this regard has, however, always been a repetition of its previous contentions — that humanitarian transactions are exempt from its sanctions.