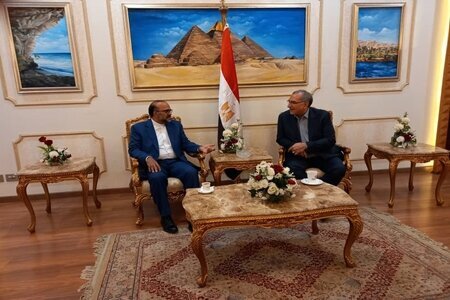 Health Minister Bahram Einollahi and his Sudanese and Jordanian counterparts discussed expanding cooperation in the fields of health, treatment, education, and medicine.

The officials met on the sidelines of the 69th session of the Regional Committee for the Eastern Mediterranean, which was held in Cairo, Egypt on October 10-13.

In the meeting with Sudanese Health Minister Haitham Muhammad Ibrahim Awad Allah while announcing readiness to expand cooperation in the fields of health, treatment, education, research, medicine, and medical equipment, Einollahi invited him to visit Iran.

The Sudanese health minister for his part praised Iran’s success in the fight against diseases and expressed readiness to cooperate with Iran in this field.

He also requested to use the experience of Iran’s health system in the three fields of medical education, health, and treatment.
Jordanian Health Minister Firas Ibrahim Al-Hawari, also welcomed the cooperation of the two countries and invited the Iranian minister of health and the officials of the health system of Iran to visit the health and treatment capacities of Jordan and compile a joint cooperation program between the two countries.

Einollahi emphasized that the two countries of Jordan and Iran can cooperate in the fields of medicine, medical equipment, research, and exchange of professors and students.

———- Strongest health system in the region

Earlier in September, Einollahi said that Iran has one of the strongest health systems in the region and this opportunity should be used optimally in the field of health diplomacy.

Based on innovative indicators of health technology development in 2021, Iran was ranked 60th among 132 countries, which shows an improvement of 60 steps compared to 2014, the deputy health minister for research and technology, has announced.

A total of 1,670 knowledge-based firms are operating in the health sector, ISNA quoted Younes Panahi as saying.

He added that there are 13 science and technology parks and 95 technology growth centers in the field of health, while 343 technological products have so far been licensed, and 335 inventions in medical sciences have been patented.

The health technology development is evaluated by the Global Innovation Index with seven indicators, including institutional structure, human capital and research, infrastructure, market and business complexity, technological knowledge, and creativity, he explained.