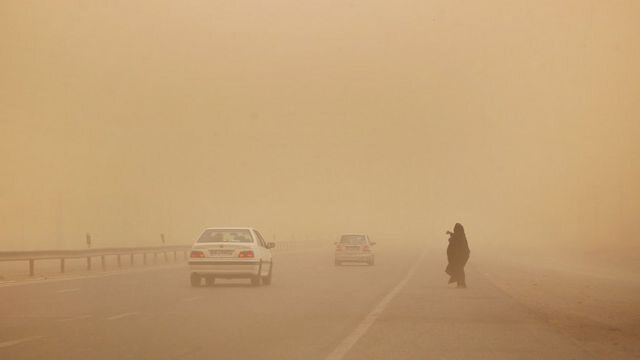 Iraq hesitates as Iran hastens to deal with SDS

While the Iranian government is quick to do whatever is needed to confront the evil phenomenon of sand and dust storm, the Iraqi side seems to be so reluctant to take action.

In July, Iran’s Department of Environment Chief, Ali Salajeqeh, and Iraq’s Minister of Environment, Jasim Abdulazeez Humadi, signed a memorandum of understanding in Tehran to boost cooperation to combat sand and dust storms.

According to the agreement, the two neighboring countries pledged to hold expert meetings on specified dates to find urgent solutions for the major concern.

The two sides agreed that a delegation from Iran will visit Iraq on October 16 and an Iraqi delegation to visit Iran on October 19. However, Iraqi officials have yet to lay the groundwork for the first visit.

Regional maps show that Saudi Arabia produces the highest level of particulate matter, followed by Iraq, Syria, Kuwait, and the UAE, respectively.“To this end, we send a letter to the Ministry of Foreign Affairs and they forwarded the letter to the Iranian Embassy in Baghdad. But we have received no response yet,” Ali-Mohammad Tahmasbi, head of the national working group for SDS mitigation, said.

It is uncertain whether the Iranian delegation can travel to Iraq on the specified date, he noted.

According to studies, eight large sand and dust storm hotspots stretching to 270 million hectares in neighboring and Persian Gulf countries are affecting Iran.

Firstly, areas in Iraq that are highly important in terms of raising sand and dust storms will be identified in order to start operations, Tahmasbi pointed out.

“Of course, Iraq is not in a favorable situation. Both the administration and the parliament are undecided. So, we do not know their response.”

The SDS phenomenon has been plaguing the country for several years and has caused problems in many provinces. According to experts, natural and human factors are involved in the occurrence and severity of this phenomenon which is mainly caused by excessive consumption of water and drying up reservoirs.

In August, DOE chief Salajeqeh said to deal with sand and dust storms, positive measures have been taken inside the country.

A ten-year plan has been prepared to curb internal sources of sand and dust storms, he added.

The internal dust sources are estimated at 34.6 million hectares, generating an average amount of 4.22 million tons of dust per year, about 1.460 million hectares are dried wetlands.

In the past four years, about €370 million has been spent by the National Development Fund to combat SDSs, which had good results, but it seems that the annual credit is declining as conditions improve.

Letizia Rossano, the director of the Asian and Pacific Centre for the Development of Disaster Information Management (APDIM), said in June that Iran is really at forefront of understanding the problem of sand and dust storms as well as dealing with it.

More than 80 percent of the entire populations of Turkmenistan, Pakistan, Uzbekistan, Tajikistan, and the Islamic Republic of Iran are exposed to medium and high levels of poor air quality due to sand and dust storms,” she noted.