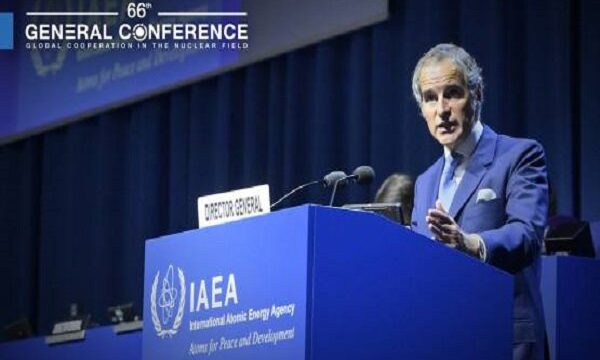 IAEA Director General Rafael Mariano Grossi stressed a need to find common solutions to problems between Iran and IAEA that are not going to go away if they do not solve them in a collaborative fashion.

“As I stated during my remarks to the 65th Session of the General Conference, the Agency’s verification and monitoring of Iran’s nuclear-related commitments under the JCPOA have been seriously affected by Iran’s decision to stop the implementation of those commitments, including the Additional Protocol,” said Grossi on Monday addressing the Sixty-Sixth Regular Session of the IAEA General Conference.

“In the event of a full resumption of Iran’s implementation of its nuclear-related commitments under the JCPOA, the Agency will need to address the gap in its knowledge of what took place while our surveillance and monitoring equipment related to the JCPOA was not in operation. There will be considerable challenges to confirming the consistency with the situation prior to 21 February 2021 of Iran’s declared inventory of centrifuges and heavy water,” he added.

The IAEA chief went on to claim, “With regard to the NPT Safeguards Agreement with the Islamic Republic of Iran, the Agency has made efforts to engage with Iran to resolve outstanding issues related to the presence of uranium particles of anthropogenic origin at three undeclared locations in Iran. Since June, Iran has not engaged with the Agency. Consequently, these issues have not been resolved and the Agency is not in a position to provide assurance that Iran’s nuclear program is exclusively peaceful.”

“The Agency remains ready to re-engage with Iran without delay to resolve these matters. We need to find common solutions to problems that are not going to go away if we don’t solve them in a collaborative fashion,” Grossi added.

Addressing the 66th Annual Regular Session of the International Atomic Energy Agency (IAEA) General Conference which kicked off in the Austrian capital of Vienna on Monday, the Head of the Atomic Energy Organization of Iran (AEOI) Mohammad Eslami said Tehran has always supported the full implementation of the Non-Proliferation Treaty (NPT) and Safeguards agreements and Iran has an exemplary record of cooperation with the IAEA in this field.

“I would like to clarify that there is no undeclared nuclear material or activity in Iran,” he stressed, noting that such accusations are solely resulting from false information raised by the usurping Israeli regime.

He also stated that Iran really expects the IAEA to fulfill its duties of reporting, monitoring, and verification in a more professional, impartial, and independent manner.