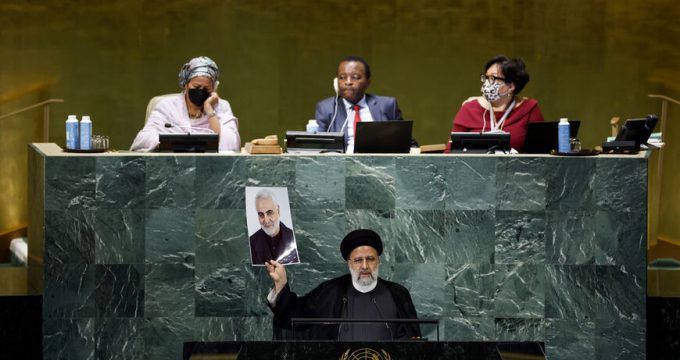 Follow along for the latest updates as Middle East leaders head to New York for the annual UN General Assembly.

Both US President Joe Biden and Raisi will give remarks on Wednesday, but the two men are not expected to meet face-to-face while in New York. Ahead of his planned address, Raisi told CBS he didn’t believe such a meeting would be “beneficial.”

10:00 a.m. Iran’s Raisi accuses US of “criminal behavior against humanity”

Iranian President Ebrahim Raisi slammed the United States during his UN speech, accusing the country of creating the Islamic State (IS), using a “weapon of mass destruction” on Iran via sanctions, and more.

Raisi began his speech by accusing some countries of “double standards” when it comes to criticisms of Iran’s human rights record. Raisi cited reports of migrant children being put in cages by the US government to this end.

Raisi’s deflection came as Iran is engulfed by protests over the death of Kurdish woman Mahsa Amini, who was allegedly beaten to death by Iranian religious police over her hijab.

Throughout the speech, Raisi slammed US foreign policy, referring to civilian deaths in Yemen, Iraq and Afghanistan, as well as the 1953 US and British-backed coup in Iran.

The president also talked up Iran’s role in defeating IS, but did not mention others who fought the group, such as US-backed Kurdish forces in Syria. He did accuse the US of creating IS, referencing former President Donald Trump calling former President Barack Obama the “founder of ISIS” in 2016. Trump may have been referring to Obama’s military withdrawal from Iraq, which paved the way for IS’ rise.

At one point, Raisi held up a picture of the late Iranian commander Qasem Soleimani, who the US killed via an airstrike in Baghdad in 2020. Raisi specifically called out Trump for authorizing the operation.

“We will pursue through a fair tribunal those who martyred our beloved General Qasem Soleimani,” said Raisi.

Much of Raisi’s speech focused on the Islamic Republic’s anger over the Iran nuclear agreement. Raisi said “we saw a new face of criminal behavior against humanity,” when Trump withdrew from the deal in 2018 and imposed harsh sanctions.

The Biden administration is currently negotiating with Iran on a return to the agreement, which reduced sanctions on Iran in exchange for the scaling back of its nuclear program. Raisi said Iran is seeking guarantees the US will not leave again due to “lived experience.” He also again denied Iran is seeking to build a nuclear weapon.

The Islamic Republic’s anger over the nuclear dispute was apparent throughout the speech. He claimed that Iran is responsible for 2% of the world’s nuclear activity, but 35% of nuclear inspections.

Raisi also unsurprisingly criticized Israel. “Seven decades Israeli occupation and savagery is still with us and not ending,” he said. Raisi endorsed a one-state solution to the Israeli-Palestinian conflict whereby Palestinians of the Jewish, Christian and Muslim faiths would vote in a referendum. Few Jews in Israel identify as Palestinian.

Raisi also praised some sectors of the Iranian economy, such as that of nanotechnology. He also praised Iran’s increasing trade with countries in the Middle East and Central Asia.

Al-Monitor observed some Iranian-Americans protesting outside of the UN headquarters in New York during Raisi’s speech. At least some of the protesters are affiliated with Mujahedin-e-Khalq opposition group, aka MEK.

Raisi spoke for around 35 minutes — well over the 15-minute limit set by the UN.