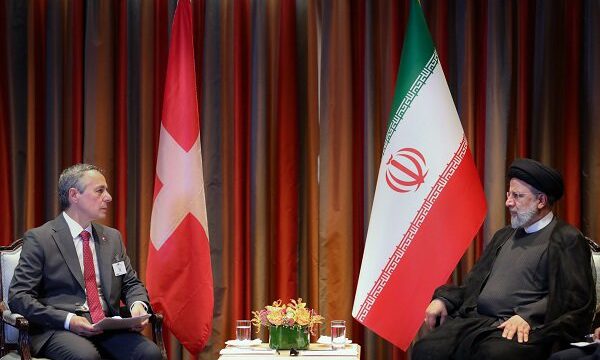 Iranian President: Demand for guarantees quite reasonable given US’ record

Stating that the current US administration claims to oppose the previous one’s decisions, the Iranian President said, “We have not yet seen practical and serious behaviour that is a sign of compensating for past behaviour.”

Speaking in a meeting with the President of Switzerland on Tuesday evening, local time, Ebrahim Raisi called the relations between Iran and Switzerland friendly and good, and said, “Increasing commercial and economic cooperation and especially facilitating monetary and banking relations between the two countries is necessary.”

The President described the problem of the nuclear issue as the Americans not making a decision, and added, “It was the United States that withdrew from the JCPOA, not Iran, and despite Iran fulfilling its commitments, the Western parties refused to fulfill their commitments.”

Emphasizing that we have not left the negotiation table and are ready for a good and fair agreement, Raeisi said, “Considering the history of the United States, the demand of the Islamic Republic to receive a guarantee of the stability of the agreement is a completely reasonable demand.”

The President noted, “Despite 40 years of pressure and sanctions, Iran has not only not stopped but has progressed, so the sanctions tactic has lost its effectiveness.”

Raisi pointed out that the current American government claims to oppose the previous government’s decisions and return to the agreement, and said, “We have not yet seen practical and serious behaviour that is a sign of compensating for past behaviours and lifting oppressive sanctions.”

In this meeting, the President of the Swiss Confederation Ignazio Cassis emphasized increasing bilateral cooperation and said, “Since 2016, a road map was drawn to improve the trade relations between the two countries, which we still adhere to, and we believe that political and geopolitical obstacles should be removed from the way of cooperation between the two countries.”

Ignazio Cassis also described the security of Iran and West Asia as the guarantor of the security of Europe and said, “Monetary and banking cooperation is one of the areas that can be expanded in bilateral relations.”