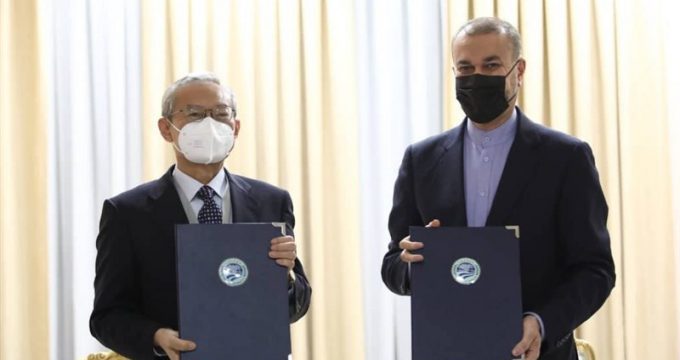 The Iranian foreign minister has inked the memorandum of commitments and arrangements allowing Iran to join the Shanghai Cooperation Organization (SCO).

Hossein Amirabdollahian announced the signing of the document in a tweet on Wednesday.

The top diplomat is accompanying Iranian President Ebrahim Raisi in a visit to Samarkand in Uzbekistan for a summit of the SCO.

“Tonight, in the historical city of Samarkand, I signed the memorandum of commitments of Iran’s permanent membership at the Shanghai Cooperation Organization, with the (SCO) secretary-general,” Amirabdollahian wrote in the tweet.

“Now, we have entered a new stage of diverse economic, commercial, transit, energy, etc. cooperation (with the SCO members),” he added.

The SCO’s Secretary-General Zhang Ming congratulated the Islamic Republic on the occasion of Iran’s “permanent accession” and signing of the document, calling it an “important development,” Amirabdollahian added, Press TV reported.

By signing its first memorandum of obligations, Iran’s accession to the full membership of the organization will be finalized by April 2023.

The Eurasian political, economic, and security alliance was formed in 2001 by Russia, China, Kyrgyzstan, Kazakhstan, Tajikistan, and Uzbekistan at a summit held in Shanghai.