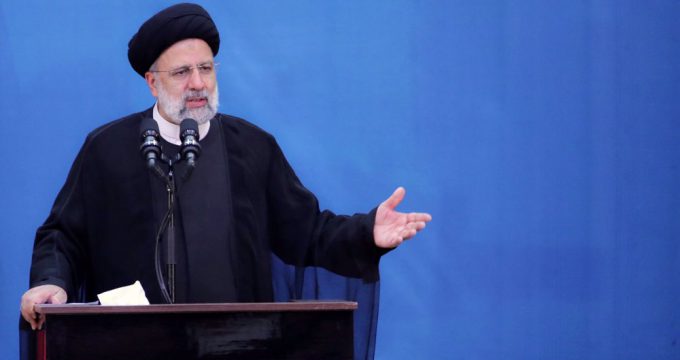 Iran’s President Ebrahim Raisi says the Islamic Republic will neither leave the negotiating table with the P4+1 group of countries on the revival of the 2015 nuclear deal nor tie its progress to the accord.

“We will not tie the country’s progress and settlement of the problems to the JCPOA (the nuclear deal, officially known as the Joint Comprehensive Plan of Action). The Iranian negotiating team will not leave the negotiating table, either,” Raisi said in the southeastern Iranian province of Kerman on Friday.

He said Iran’s progress and economy would never be kept back on account of other people’s “smiles and scowls.” The negotiating team, Raisi said, would continue its work based on “very strong” arguments.

“We will seriously address Iran’s economic and cultural circumstances regardless of the path the [JCPOA revival] negotiations take and what will happen in the future.”

Despite the enemies’ wish, he said, Iran’s affairs would be pursued with participation of the people and the elites and the country’s future will be bright. “We will not let the enemies fulfill their objective, which is to paralyze production and destroy the Iranian economy and culture.”

Negotiations have been held between Iran and the P4+1 group of countries – Britain, France, Germany, Russia and China – in the Austrian capital of Vienna since April last year to restore the JCPOA, which was ditched by former US President Donald Trump in May 2018.

In quitting the agreement, Trump unleashed what he called the “maximum pressure” campaign to bring Iran to its knees. Washington also reinstalled unilateral sanctions against Tehran, which had been lifted under the JCPOA. Tehran maintains that the policy has failed dismally.

Iran has cited Washington’s indecisiveness as the reason behind the protraction of the talks, as a number of key issues remain unresolved, ranging from the removal of all post-JCPOA sanctions to the provision of guarantees by the American side that it will not leave the deal again.

Iranian Foreign Minister Hossein AmirAbdollahian said last month that it is a “necessity” for Iran to gain economic benefits from the 2015 agreement and thus wants “strong” guarantees in talks on a potential revival of the deal.
By PRESS TV
Iran talks Vienna, JCPOA, P4+1 group August 13, 2022
Iran’s sports min. leaves for Konya
Advisor to Iran negotiating team reacts to attack on Rushdie