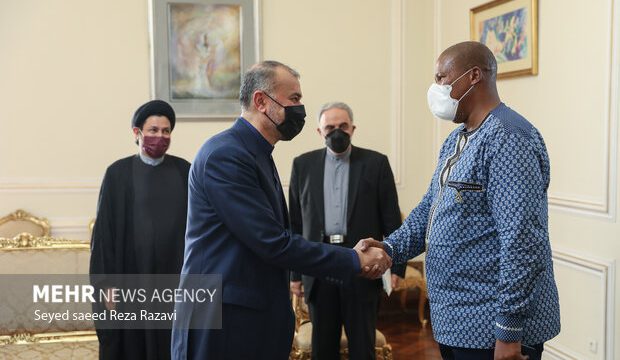 In a meeting with Nelson Mandela’s grandson, the Iranian Foreign Minister hailed his efforts aimed at strengthening Iran-South Africa cooperation and his unlimited support for the oppressed Palestinian nation.

The top Iranian diplomat welcomed the South African leader’s grandson and expressed delight over that personality’s visit to Tehran, which he said reminds Iranians of his dear grandfather.

AmirAbdollahian also appreciated Mandla Mandela for his efforts aimed at strengthening Iran-South Africa cooperation and his unlimited support for the oppressed Palestinian nation.

The top Iranian top diplomat said that for Iran, the late Nelson Mandela’s stands, and the South African Congress Party’s approach to the Palestinians’ ideal are noteworthy.

He also said that the establishment of a parliamentary friendship group between the two countries’ parliaments is very important.

The grandson of the champion of the campaign against apartheid, Mandla Mandela, too, in the meeting appreciated the warm and intimate hospitality of the Iranian officials.

He said that the Islamic Revolution of Iran was quite inspiring for the South African nation, and filled the heart of the late Nelson Mandela who was at the time in jail of the South African apartheid regime of the time.

He said that at the 52nd General Assembly of the African National Congress (ANC) party, the representatives unanimously asked for lowering South Africa’s relations with Israel, and along with Algeria, and a number of other African countries, the ANC also opposed Israel’s membership in the African Union.

He said that the Palestinian groups and people’s organizations decision to protest the Zionist regime, which is a symbol of apartheid is of great importance.

Nelson Mandela’s grandson also emphasized that the level of mutual cooperation with Iran needs to be increased.