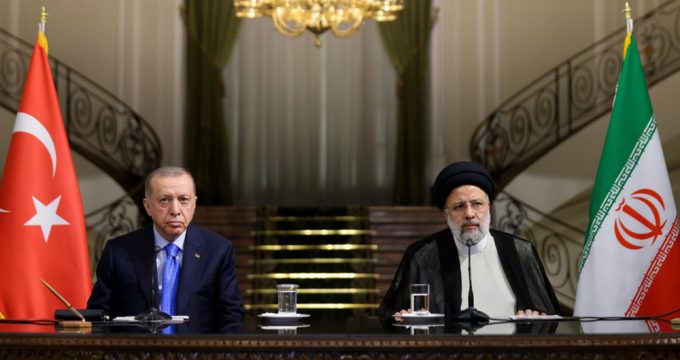 Terrorism must be fought with in all of its manifestations: Raisi

President Ebrahim Raisi has underscored the importance of maintaining security on Iran’s common border with Turkey, saying terrorism must be fought with in all of its manifestations.

The Iranian chief executive made the remarks during a press conference with his Turkish counterpart Recep Tayyip Erdogan in Tehran on Tuesday. The Turkish president arrived in the Iranian capital on Monday evening for a two-day visit at the invitation of Raisi, who received him during an official ceremony.

Pointing to the countries’ cooperation on security issues, Raisi said, “[the issue of] border security was emphasized between Tehran and Ankara as well as the fight against terrorism, narcotics, and organized crime.”

“[Terrorism] might assume different names. [However] terrorism translates into endangerment of people’s security and must be fought with no matter its name, so that security can be provided for the borders,” the Iranian president noted.

“The two powerful countries could play a very important role in [reinforcement of] regional and international security,” he added.

The Turkish head of state is expected to join Raisi and Russian President Vladimir Putin, who has also arrived in Tehran on an official visit, for a summit focusing on Syria.

Erdogan’s visit would “undoubtedly, serve as a turning point in expansion of the bilateral ties, Raisi said, adding that the countries were “serious” regarding the development of their relations.

The level of the countries’ trade ties could reach $30 billion, namely three times their current level, the Iranian president said.

Earlier during the trip, the two sides signed eight memoranda of cooperation concerning such issues as devising a comprehensive plan for long-term bilateral cooperation, provision of support for small economic agencies, cooperation in the area of radio and television, and cooperation between Iran’s Investment and Economic Assistance Organization and the Turkish Presidency’s Investment Office.

The Turkish president also noted that the coronavirus pandemic had come in the way of expansion of the countries’ trade ties, voicing hope that Tehran and Ankara would be able to help the current level of the ties reach the $30 billion benchmark.

The Turkish head of state is expected to join Raisi and Russian President Vladimir Putin, who has also arrived in Tehran on an official visit, for a summit focusing on Syria.