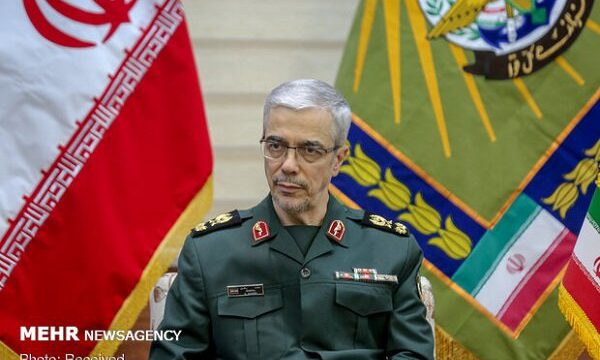 Iran to respond to Israeli meddling in region: Gen. Bagheri

The Chief of Staff of Iran’s Armed Forces says that the Israeli regime’s integration in CENTCOM and its presence in military drills in the region is a threat, adding that Iran will respond to Israeli meddling in the region.

The Chief of Staff of Iran’s Armed Forces Major General Mohammad Bagheri made the remarks in a meeting with the Chairman of the Joint Chiefs of Staff Committee of the Pakistani army General Nadim Reza on Monday at the complex of General Staff of the Iranian Armed Forces in Tehran.

In recent years the relations between Tehran and Islamabad have developed well with the efforts of the commanders and officials of the two countries, General  Bagheri said in this meeting, adding that these relations must be developed and continued.

Also, military relations between Iran and Pakistan have witnessed significant growth in recent years, which has ensured the security and economic development of the two countries.

The region where the Islamic Republic of Iran and Pakistan are located is very important and sensitive, he further noted.

According to him, recent regional developments have led to the intervention of foreign powers from beyond the region, and this created problems at the regional level.

Saying that the Zionist regime stands at the core of insecurity and instability in the region, he added that the regime is plotting to establish ties with regional states and achieve meddlesome goals.

The creation of Takfiri terrorist groups in the region, especially in Syria and Iraq, is one of the interventions of the United States and the Zionist regime in the region, he explained.

Elsewhere in his remarks, he said that the issue of Afghanistan is one of the most influential issues between Iran and Pakistan.

Given the situation in Afghanistan, the participation and involvement of ethnic groups will play a constructive role in creating security and stability in the future of the country, Gen. Bagheri said.

Elsewhere, he said that the Kashmir issue is another issue in the Islamic world, and the Position of the Islamic Republic of Iran in this regard is the same approach and stance of the Leader of the Islamic Revolution that takes into consideration the support for the oppressed and Muslim people.

“Another issue in our region is the Yemen catastrophe, which has been going on for a long time and this must be ended immediately.”

According to the top Iranian military official, the Russia-Ukraine war will definitely affect the region and the entire world, and NATO’s expansion to Russia’s borders is a threat to its security, he also said, expressing hope that the parties will resolve the issues and problems through dialogue.

General Nadim Reza arrived in Tehran on Sunday at the official invitation of Major General Mohammad Bagheri, with the aim of expanding bilateral cooperation in order to establish lasting security in the region and increase military interactions and joint educational and security cooperation.