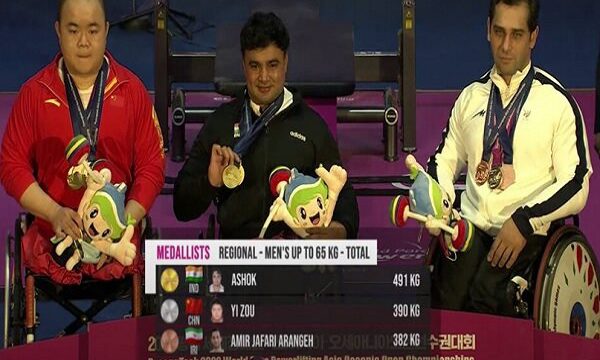 Amir Jafari Arangeh of Iran claimed a bronze medal in total lift of the Men’s Up to 65kg of the 2022 Asia Oceania Open Para Powerlifting Championships on Friday.

According to the Tehran Times report,  Amir Jafari Arangeh first won a silver medal in the weight class, lifting 195kg.

He then claimed the bronze medal with a total lift of 382kg.

Indian powerlifter Ashok claimed the gold with a total of 491kg and the silver medal went to Yi Zou from China who lifted 390kg.

The 2022 Asia Oceania Open Championships take place from June 15 to 20 in Pyeongtaek, South Korea. The event has brought 231 athletes from 33 countries across the six days of competition.

It is the first of four Regional Championships in the 2022 Para powerlifting season followed by the Americas, Africa, and European Open Championships.

The competition is divided in to 10 weight classes each in men’s women’s categories. Athletes compete in a single weight class. The event will end with the men’s, women’s, and mixed team events.