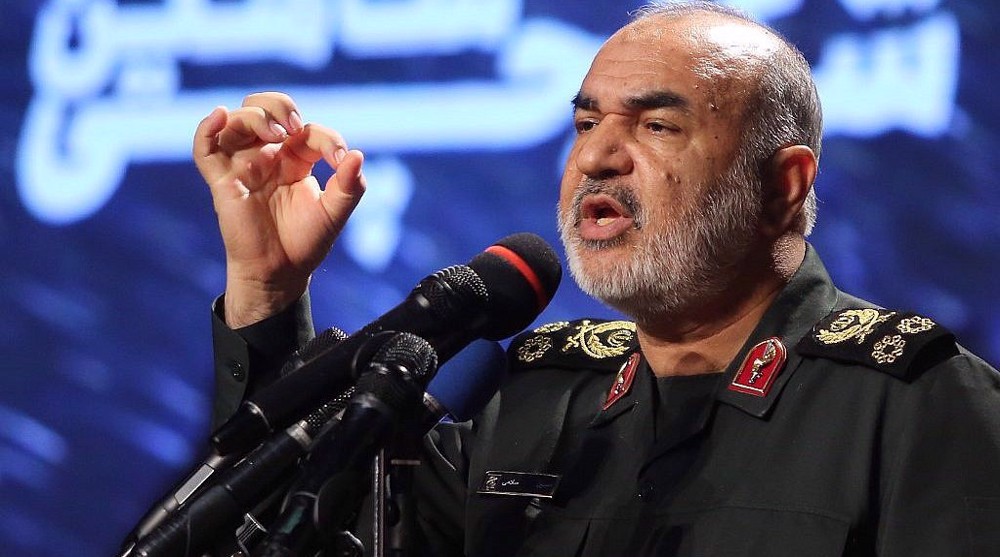 The chief commander of the Islamic Revolution Guards Corps (IRGC) has blamed the last week assassination of a member of the force in Tehran on the “Zionists,” emphasizing that Iran will avenge him.

Major General Hossein Salami made the remarks in a Monday meeting with the bereaved family of the former IRGC member Hassan Sayyad Khodaei, who was brutally assassinated in an armed attack by two motorcyclists in Tehran on May 22. He played a significant role in the fight against the Daesh Takfiri group and other terrorist outfits in the region.

Khodaei was killed “by the most vicious people, the Zionists, and God willing, we will take revenge for [his assassination] on enemies,” the IRGC top commander said.

The enemy was tracking the IRGC member from the White House and Tel Aviv for months and years to assassinate him at some point, the top IRGC commander added.

In a Wednesday letter to Secretary General of the United Nations Antonio Guterres, Iran’s permanent ambassador to the United Nations Majid Takht-Ravanchi warned against the dangerous consequence of terrorist and criminal acts against Iranian citizens, saying the international community must strongly condemn the recent assassination of the IRGC member in Tehran.

“Given the dire implications of this terrorist and criminal act on international peace and security, inaction and silence in the face of such a provocative and norm-breaking act will only encourage and embolden its perpetrators and their accomplices to continue their disgraceful and wrongful acts,” the senior Iranian diplomat said.

Meanwhile, The New York Times on Wednesday quoted an Israeli intelligence official as saying that the Tel Aviv regime has informed American officials that it was behind the assassination of the IRGC member.

Israeli officials have claimed, according to the report, that Khodaei had been involved over the past two years in attempted attacks against Israelis, Europeans and American civilians and government officials in Columbia, Kenya, Ethiopia, the United Arab Emirates and Cyprus.

Israel’s footsteps have already been traced in a number of attacks on Iranian nuclear sites and the assassination of its scientists.